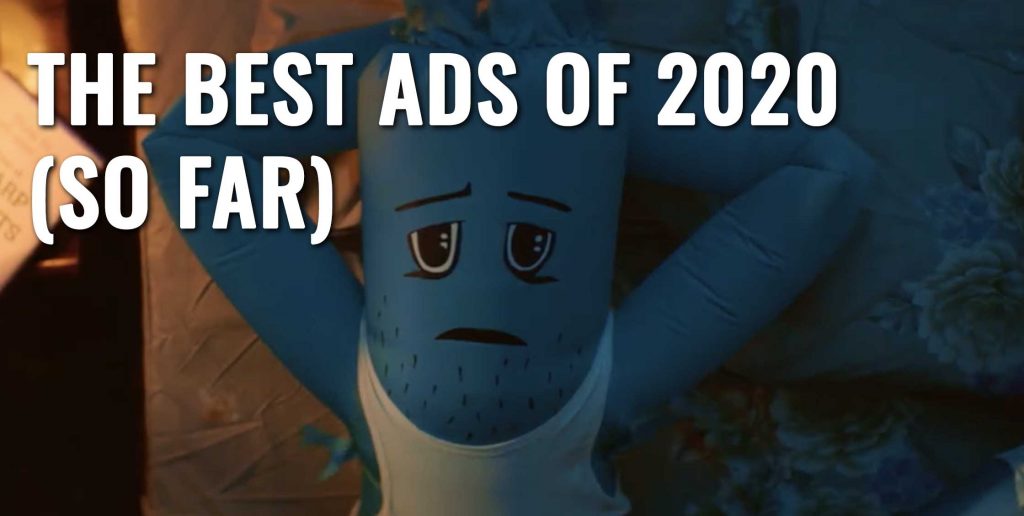 If 2020 were a person, they would be… well… an arsehole. But doom and gloom aside, there have been some positives within the creative world.

Tik Tok has given everyone a chance to become internet famous for a while.

Creative courses, workshops, and many other things have removed charges, so everyone has access. It’s a wonderful thing.

Meanwhile, advertising companies have also been on top form.

So, what better way to showcase the best ads of 2020, whilst simultaneously breaking the monotony of isolation, than with a top 10.

That’s right, I have compiled my top 10 funny adverts of 2020, so far. Pop the kettle on, put your feet up, and enjoy the ride!

Here are the funniest commercials of 2020, as chosen by: me!

You’ll find one big game Ad here, maybe two – but you won’t find a list full of them.

Sorry Bud Light. Apologies Doritos Cool Ranch. Stand down, Rocket Mortgage. And Jason Momoa, Lil Nas, Sam Elliott, Ellen Degeneres AND MC Hammer – none of you can touch this. So grab yourself a Michelob Ultra, and step back – because this is MY list.

Oh yeah, if you don’t agree with my list, don’t worry I won’t be cross, but I think you’ll find that you’re wrong. However, please do comment on what your top 10 would be.

Let’s imagine this were a parade of hit songs, and start at number 10. I would start with number 1, but that would ruin the surprise. And boy, is it a surprise?! Well, it depends if you’re easily surprised, I suppose.

With this ad, McDonald’s have chosen to blast their competition. Now, ripping into your counterparts can be a risky business, but handled well, it can make your brand stand out above the rest. Especially when humour is involved.

McDonald’s know their customers and have targeted them directly. They have contrasted the ridiculousness of modern-day coffee shops, with the simplicity of the McCafé. With a barrage of visual gags, this ad deserves more than one watch, and by the end, you are left with no doubt as to what the brand message is. Great ad. 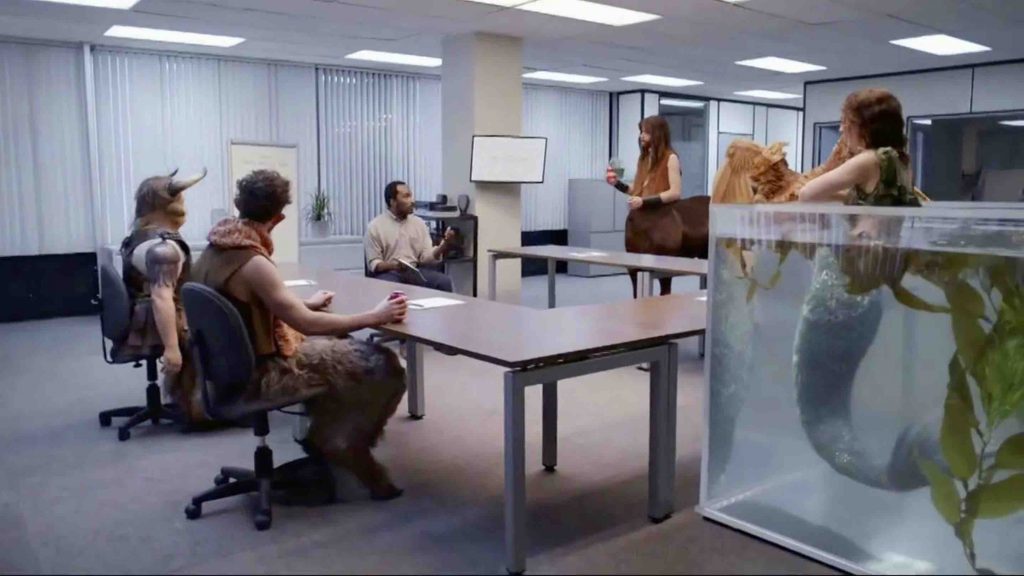 I love how clever this ad is. At first glance you are just watching some creatures in a meeting. Then it hits you, bam! The drink is a mix of two things – Cherry Coke and Vanilla Coke – and the creatures are all mythical beasts each comprising of a mixture of animals.

Once this hurdle is hurdled, you can appreciate the cleverness of the ad. Hybrid beasts confused that two things can be mixed to form one thing, great!

Now, it may not be side splitting, pants wetting funny, but it is funny and very clever. Maybe there could be more room for jokes in future ads? Let’s hope so.

When Snickers released their ‘You’re not you’ ads, they worked a treat. Mr Bean as a Ninja, a moody footballer, all good fun. What they have done with this ad is supersized that idea.

They have taken everything that is ‘wrong’ with the world, put it in a song, dug a massive hole, and are now going to fix the world with a massive Snickers.

Fantastic, and if only it were true! I know we definitely need some fixing right now. It’s light-hearted, relatable, and with the addition of an extra gag at the end, well worthy of the number 8 spot – and all the love it got at Super Bowl LIV.

Side note: who won? Was it the Kansas City Chiefs, or the San Francisco 49ers? Spoiler Alert: it doesn’t matter! Because it’s not about that. It’s about continuing our Top 10.

Everything about this ad is great. The character, the acceleration of jokes, the mix of visual and verbal gags. This dads disdain for his son’s apprenticeship is crystal clear. He is appalled at the thought that his son won’t have a degree, and instead he’ll just be ‘making stuff out of wood.’

That classic New Zealand dry sense of humour really comes out here. Questions like ‘don’t you like money?’ paired with the dad’s kooky actions, provide a cringe packed minute of well made comedy advertising.

Paul Giamatti is world class, so straight away you’re on to a winner. There was room for more ‘escalation’ in the gags, maybe bigger and wackier purchases, but from the jet ski joke at the start, to the ‘inanimate’ gag, this ad does tick all of the boxes.

Add in Succession’s Kieran Culkin as the client, and the casino end gag, and you have yourself a classy, clever ad. Beautifully filmed, with the feel of a mini movie rather than a car commercial, this ad sits nicely at number six.

Side note: did you know Ellen Degeneres drives a Volkswagen?

Considering the length on this ad, you could have been left bored to tears. This isn’t the case at all. Absolutely jam packed with gags, it goes from zero to 100 in 20 seconds. After showing that the UK is pretty much in a state of misery, Three are quick to show us all how awesome everything will be on their 5G network.

From Greggs to Lewis Capaldi, they don’t hold back on showing everything that is British in one exciting futuristic set up. This ad definitely deserves to be re-watched. With a commercial featuring so many jokes, small gags and references, you will spot more every time you watch it. It was a gamble to have such a lengthy ad, but Three have pulled it off brilliantly.

Now, you’re probably the same as me when it comes to the ‘Whassup’ catchphrase. It’s had its day. Well, Budweiser have managed not only to bring it back into the limelight, but add a whole new spin on it. Using modern smart appliances and devices to talk to each other in the same way as the original ad did is a stroke of genius.

Pretty much everyone has at least one smart device at home these days, so everybody is able to relate. Even down to the last few seconds with one of the devices almost getting caught, this ad keeps it going the whole way through. A great revival of a classic ad.

This ad is great. Using Bone Thugs-N-Harmony to advertise your wings is brilliant enough, but to have them in a mockumentary style ad, changing their name to Boneless Thugs-N-Harmony is fantastic. This ad follows the group as they try to get band member Layzie Bone on board with the name change.

The ad is full of gags and hidden references, and even comes with a gold plated boneless wing! The fact the band take the piss out of themselves adds to the feel of the ad, giving it that extra edge. This is my number three, and “I ain’t changing shit!”

Old Spice always deliver, and this ad is no exception to that rule. With a mix of funny dialogue and visual gags, it caters for everyone. From the product dripping with fondue cheese, to his hair catching a knocked over drink, this ad keeps giving bizarre but brilliant comedy gold.

But if that wasn’t enough, instead of having the tagline sung as part of their end scene, they go all out and give almost full information and instruction. It’s ludicrous, but brilliantly funny, and it rounds off the ad perfectly. Hats off to this ad, just narrowly missing the top spot.

So, here we are at the number 1 spot. This ad from Waze is great. From the narration, to the regular jokes, to the lady being hit on the bus, it keeps you engaged throughout.

Story telling, while making perfectly clear what your product is, and including laughs is no small feat. This ad has it all.

With its tragicomedy style, you are taken into the world of a failed inflatable tube man, and his journey to obscurity. By the end you are gripped by his story and championing him along. What makes this ad great is there is no need for a snappy tagline or hard sell at the end.

They have done all the heavy lifting during the ad, bringing their message and the comedy together leaving you knowing exactly what is going on, without the bitter aftertaste of a forced sales pitch ruining the fun.

So that’s it – that’s my top 10. If you’re gutted that this list didn’t include every single Super Bowl Ad under the sun, then firstly – forget about Super Bowl Sunday and move on with your life. But secondly – you might enjoy our list of the 50 best commercials ever.

It’s based on your votes – and it’s packed full of super bowl commercials.