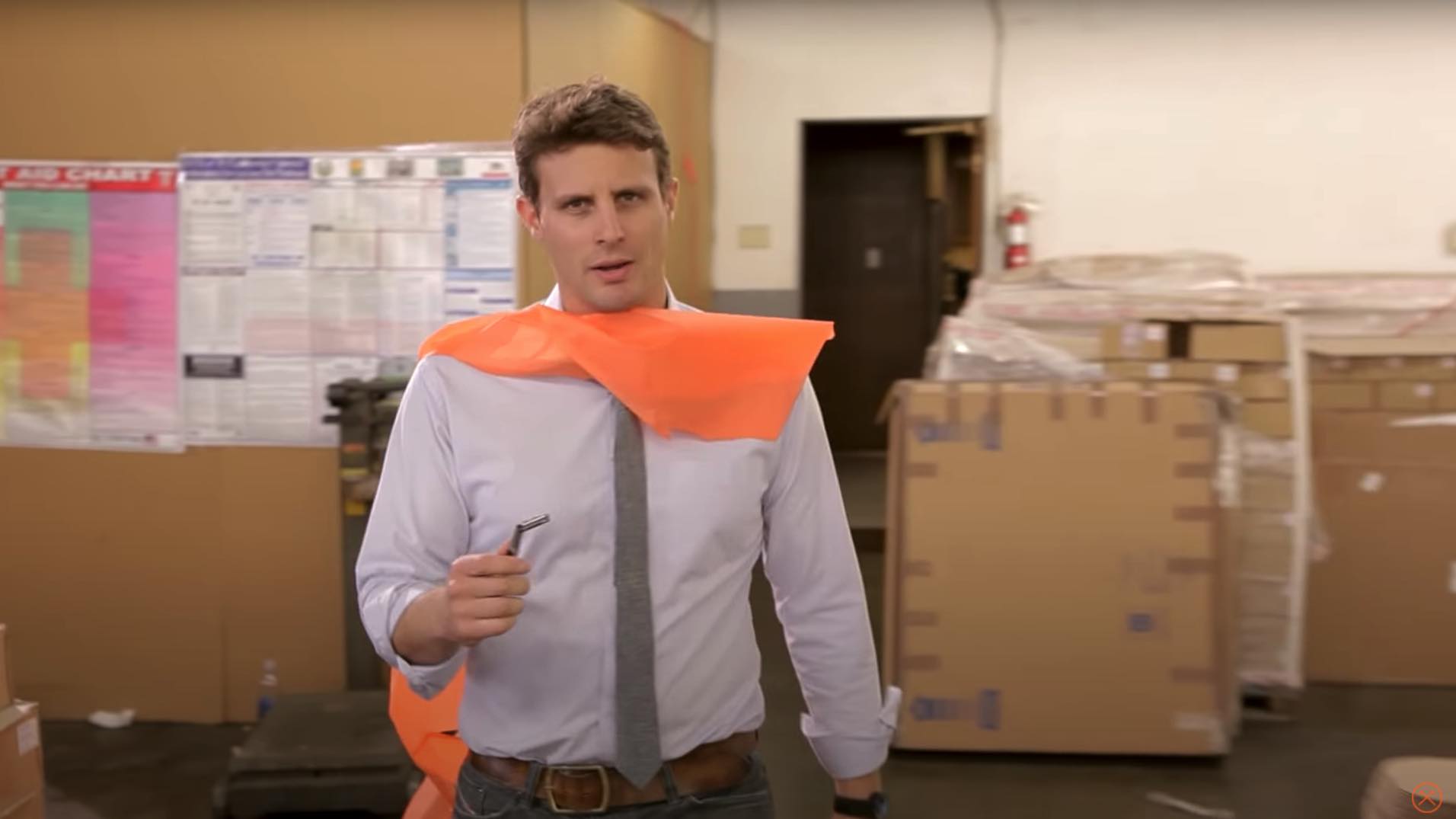 When Michael Dubin was offered a warehouse full of surplus razor blades in 2012, he had a bold idea. Once he’d had a shave, he had another, even bolder idea.

He founded Dollar Shave Club. It was a straightforward offering — customers would get razors delivered to their door for just one dollar a month. No fuss, much cheaper than the alternatives, job done. Eight years later, Dollar Shave Club offers a wider product range but their core ethos remains, as ever, to make shaving simple. Oh, and make a lot of money. Like, a LOT a lot. The brand was acquired by Unilever for a sharp $1 billion.

It all started with a viral video. Dubin knew that Dollar Shave Club’s marketing would have to stand out in order to earn them a corner of the razor market — back then, Gillette held a 72% market share. The brand’s first advert is now legendary and has been widely emulated, for good reason. Titled ‘Our Blades Are F***ing Great’, it starred Dubin himself walking through the warehouse, making funny boasts about their service. The script combined sitcom-worthy lines like “Your handsome-ass grandfather had one blade…and polio,” with a wealth of visual gags, giving the distinct impression that DSC was a brave new brand that wasn’t there to f**k about.

The video took just one day to shoot and cost only $4,500 — roughly the price of one bottle of artisanal beard oil. This remarkably low expenditure was partly due to the fact that the ad wasn’t conceived in a brainstorming session at a swanky marketing agency (unlike that one that made everyone hate Gillette in 2019). No, the idea came from Dubin’s time studying improv comedy with the Upright Citizen’s Brigade — marking the first time in history that an improv comedian has earned any money or indeed the respect of their parents. It was directed by fellow UCB veteran, Lucia Aniello.

Dubin has always known that comedy ‘is a very powerful device in telling a story,’ so it’s perhaps unsurprising that he would leverage this to build a successful business. He was right, of course; the ad instantly brought in 12,000 orders, and now has nearly 27 million views on YouTube.

Of course, once you’ve won over millions of fans with a funny video, you need to keep them laughing — or that reputation will fade. Dollar Shave Club has continued to make humour an integral part of their social media strategy and marketing campaigns. In 2013, they launched their One Wipe Charlies toilet wipes, with a similarly hilarious video that followed pretty much the exact same formula as the first — albeit with more supporting actors, more locations, and more poo.

Dollar Shave Club 2 – One Wipe Charlies from Disqo on Vimeo.

Funny adverts are still a central component of their strategy in 2020. A recent commercial titled ‘Our razors are borrowed for a reason’ depicts a man’s partner shaving her legs with his DSC razor. It’s comedy with a much lighter-touch than Dubin’s confident swagger, but it’s comedy nonetheless. Compare the above examples with the surreal weirdness of the 2015 video, ‘Meet B.A. Loonman, Man Made of Balloons’ and you’ll see that DSC have been playing the field in terms of comedy taste — if you don’t like one of their ads, you might like the next one. Once they’ve got a laugh out of you one way or another, their brand identity and message is stuck in your head for good (or maybe nestled in your beard hair, next to that cornflake).

DSC’s focus on video used to go hand-in-hand with their social media marketing. Dollar Shave Club’s ex-CMO Adam Weber noted that while TV was an important advertising space for them, the social media platforms are ‘great venues for telling stories via video’, and ‘offer a lot of unique capabilities that something like television doesn’t offer’. He was talking about being able to directly engage with your audience, exponentially build brand awareness through viral content, and cultivate brand loyalty through repeat exposure.

Sadly, when it comes to social media, Dollar Shave Club have lost their way in recent years.

It’s not for lack of trying to be funny. At the time of writing, their pinned Tweet reads, “We want to celebrate your balls. Reply to this tweet using #paintmyballs and #contest and tell us what your balls mean to you. Use poetry or tell us a story, just DON’T use a camera. You could win $25k and see your testes turned into fine art.”

They also regularly post links to the punched-up blogs that live on their website. These articles aren’t always directly about male grooming, but they ARE always about topics they know will resonate with their target audience — primarily drinking, eating meat and pooing. And if none of those take your fancy, check out the recent ‘What’s This Stuff in my Belly Button?’ (Ok, so maybe DSC isn’t exactly the classiest joint in Shaving City…) In theory, this is a clever way to move social media followers along the sales funnel, taking them that much closer to the part of the site where they’ll hand over their money.

Problem is — we wonder if anybody is actually clicking through. It certainly doesn’t look like it. We don’t have access to DSC’s social media analytics, obviously. But what we can see is that while their Facebook page has over three million likes, their posts are seeing less action than a freelance comedy writer with social anxiety and a questionable dress sense (just a random example, don’t read too much into it).

So what’s gone wrong? The way we see it, Dollar Shave Club aren’t playing to their strengths on social media. At all. The brand’s entire reputation (and fortune) was built on a single viral video, yet they haven’t posted any video content to their Facebook, Instagram or Twitter feeds for…*checks notes*…over six months. Say what!? Even then, the seven-second clip they posted could be described as fun, sure, maybe, at a stretch — but not funny. It certainly doesn’t bear any resemblance to the sketch comedy content that got them all those followers in the first place.

What would we recommend?

They need to go back to their roots (or indeed follicles). Dollar Shave Club’s social media pages should be pumping out well-written, talent-led comedy video content on the daily. Ok, so that’s easy for us to say — we’re not the ones spending the marketing budget. But don’t forget, it was Dollar Shave Club who showed the world that video marketing needn’t be expensive!

Hell, it needn’t even be Dubin in the videos — he’s probably busy on a yacht somewhere, and fair play to him.  It just needs to be someone with comedy chops. In our not-so-humble opinion, the current social media marketing team must learn from their own brand’s historical successes, and work with comedy talent both in front of and behind the camera to keep their audiences entertained with genuinely funny video content.

Then, and only then, will they re-engage the millions of currently disinterested fans who liked the Facebook page hoping for precisely that.

Everything you need to know in order