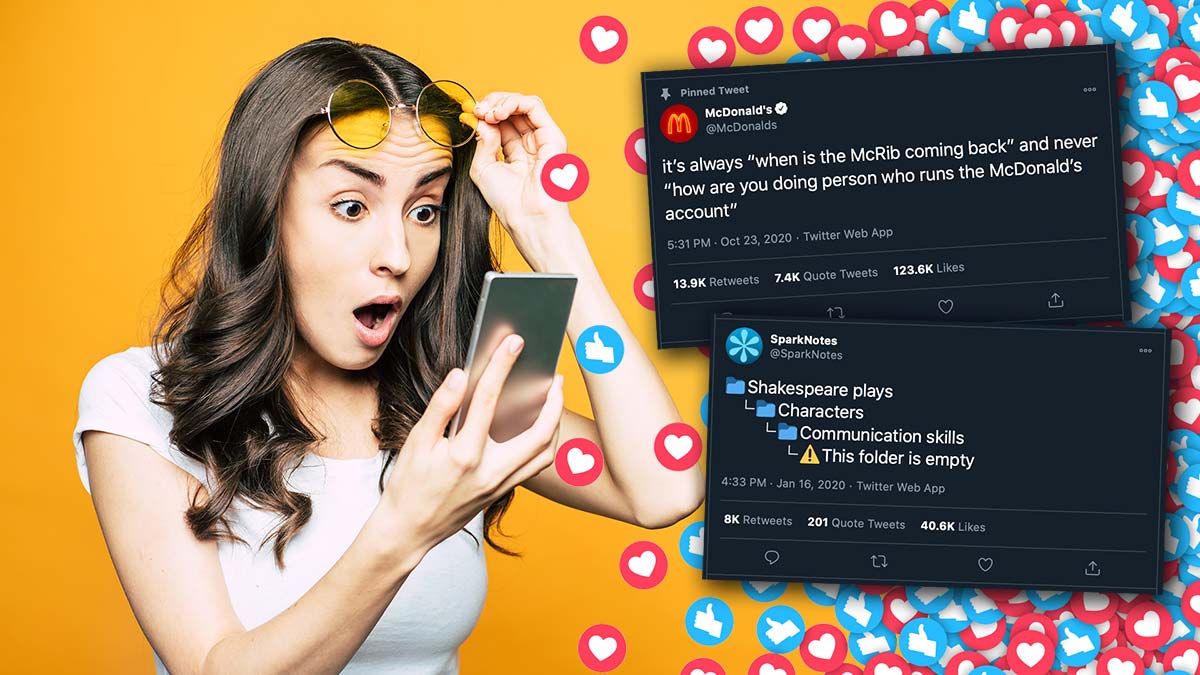 “People just don’t want to engage with brands on social…” A great way to explain away those results – but is it true?

Today I’m going to prove that it’s not – and explain the only thing that really matters when it comes to engaging a social audience.

Plus, read on to discover:

Engagement on social can feel impossible to come by

Whether the posts are representing a global brand, or a local store, social media can sometimes feel like an impossible nut to crack.

All we want is to share the product, and its story, with the world. We put our heart and soul into a post – we make them personal, personable, we make them human.

We sit there with our fingers crossed – hoping for more likes and shares than last time.

Maybe even a comment or two if we’re lucky.

All of a sudden, the phone bursts back to life – that delicious red dot winking at us seductively. A notification! Finally – the post must be getting a reaction!

Just been tagged in a career-endingly-embarrassing photo from 2007.

Quickly untag, and then get back to the matter at hand: waiting, with fingers crossed, hoping someone, somewhere, engages with that post.

There must be an easier way, we think to ourselves.

Those “Tips, Tricks and Ninja Hacks” send us all on a wild goose chase

Google “How to increase engagement on social media”.

A whole bunch of copycat articles all pitching the same set of “Tips, Tricks and Ninja Hacks”.

But I want to let you in on a secret.

These articles don’t exist to give us the answers we need. They exist to turn our Google Searches into site visits.

And it gets worse.

The tips in these articles are rarely selected based on what really works in the trenches.

They’re chosen based on an analysis of which keywords feature in other articles that already rank for the same search term.

So when BS advice ranks highly, others will rehash and recycle the same BS advice – until the signal gets so strong that it becomes genuinely impossible to rank on Google without it.

So what IS the secret to engaging an audience on social?

Well – let’s think about that.

There are some brands that absolutely boss it.

What do these brands have in common?

These brands aren’t coming at us with sales pitches, special offers and voucher codes – they’ve learnt that they need to entertain and engage an audience on social first, long before they try to sell.

Comedy is the key to entertaining, and engaging, your audience on social

It’s 48 days until Christmas so if you start an advent calendar today you’ll finish it bang on time to start another one on December 1st.

The funny fake products that help sell real ones

When they do post about smoothies – it’s often made-up smoothies.

57 problems but breakfast ain’t one. We’ve teamed up with @HeinzUK to make some new smoothies that are perfect for the mornings.

This fake collab with Heinz was a brilliantly silly move. This post alone got 532 people talking, 1200 sharing and 1600 people hit the like button – and it was only a tiny part of the campaign.

Most of the comments were from people shocked and appalled by such a crazy idea – and Innocent took the time to respond to each and every one of them personally – pretending to insist the Beanz Machine smoothie was for real.

Study Guide providers SparkNotes could’ve posted 40,000 tweets telling us up front about their new Shakespeare SparkNotes – and even then, not come close to the levels of engagement on this one tweet.

It’s a joke you’ll only “get” if you’re studying (or have studied) Shakespeare – which makes it laser-focused toward their target market.

Tell someone about a product, and if they don’t need it right now, they’ll forget it was even mentioned and move on.

But find a way to embed the brand message in their mind – using wit, warmth and personality – that brand will stay front of mind. When the time is right and they need a product like yours, they’ll have already sold themselves on it.

Wondering whether the reaction these brands are getting is purely a function of their audience size? Read on.

Here’s Coca Cola’s first tweet about a brand new drink – they shared their new advert, and their HUGE audience of 3.3million gave them just under 700 engagements in total.

We’re here to hook you up with some ENERGY! Anyone out there struggling to #ShowUp? #CokeEnergy pic.twitter.com/DU6SXKTk8g

The “Stealth Pitch” with an unthinkable ROI

McDonalds, meanwhile – broke the fourth wall with a relatable joke, and used this “stealth pitch” method, as the first mention of the return of a particular burger.

From an audience of a similar size, they got almost 160,000 engagements – that’s 228 times as much love – and they didn’t even have to shoot a glossy advert with Jonah Hill to get it.

The secret to the success of branded comedy content.

So why does humour work so well for brands on social?

Well – the answer is devilishly simple.

Comedy content gets an audience talking – and that means Comments. Discussion of the topic, people sharing their own stories, sharing their own jokes, and even people just commenting to say how much they loved that post – whatever their reason for responding – every comment counts.

Plus – jokes only work when they’re based around a hidden truth – and thanks to the nature of branded comedy, that truth is always going to be one an audience wholeheartedly agrees with – which leads to Likes and Shares. The audience telling the world a brand is funny, and it’s right.

And that’s before we even begin to dig into the psychology of why comedy content is so effective in and of itself as a marketing material.

We’ve only just scratched the surface

Want to go deeper, and really get under the skin of why (and how) comedy works so well for brands?

Want to discover a super simple technique you can use to write brand-safe jokes for your own brand’s socials?

Jokes that supercharge engagement, and boost brand loyalty, even for brands and businesses with a small following?

This free on-demand webinar from White Label Comedy will definitely be your jam: https://whitelabelcomedy.com/free/webinar03