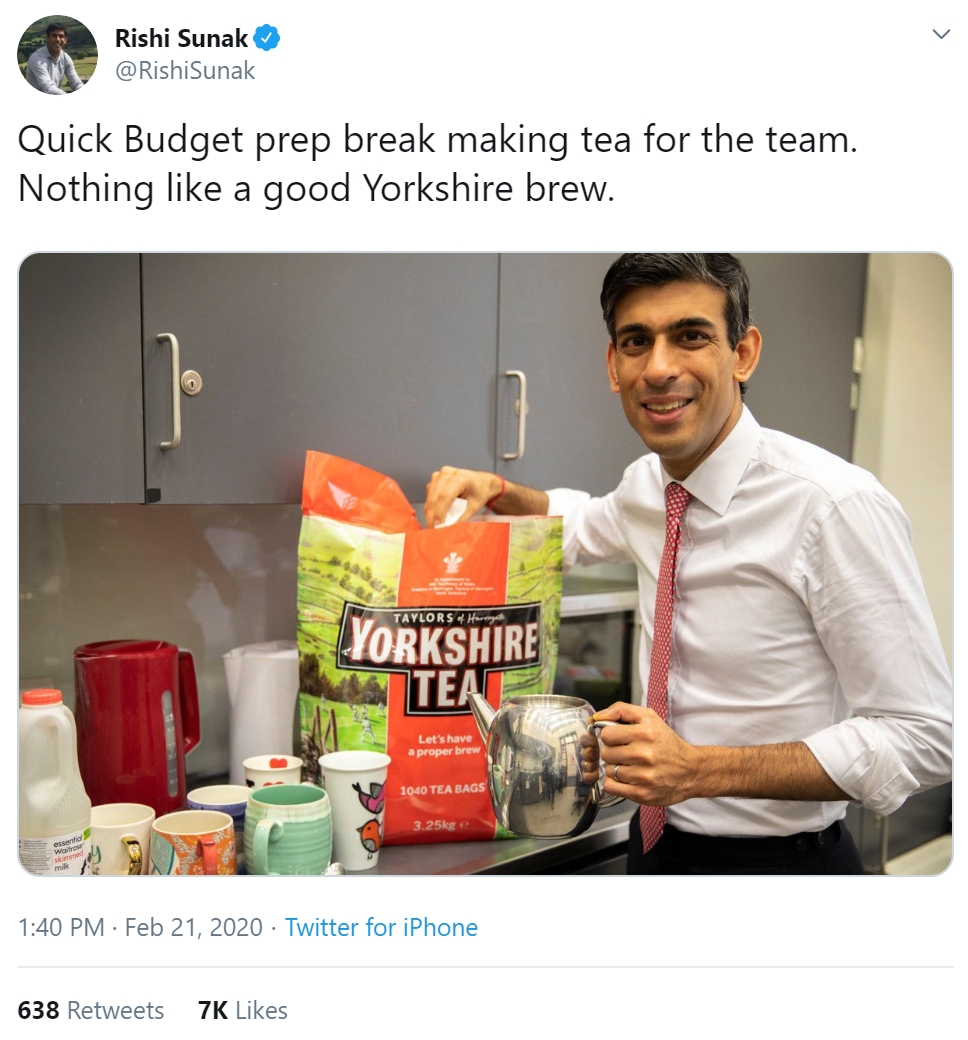 As comedy writers, we value laughter above nearly everything else.

So yeah, we’ll admit it. Every now and again, we make a joke that takes aim at somebody specific — but we always think carefully about how it might make them feel and, fundamentally, we try to be kind. Unfortunately, not everyone shares this ideal, and this is abundantly clear when it comes to social media.

We interrupt our usual programming of Funny Ads analysis to bring you this case study of Yorkshire Tea, who, in their own words, had a ‘rough weekend’ on Twitter. Read on to find out how they not only weathered the storm, but came out the other side smiling. Hint: it’s all thanks to their funny social media marketing team!

How Yorkshire Tea used Comedy on social as Damage Control

When the newly appointed Chancellor of the Exchequer, Rishi Sunak, posted this picture on Twitter, the sound of a marketing team’s sphincters tightening echoed across the Yorkshire dales:

Presumably, the Tory thought this would be a great way to show the people of the North of England that he’s one of them.

Unsurprisingly, Twitter wasn’t buying it. The majority of the backlash however, wasn’t aimed at Mr. Sunak — it was aimed at Yorkshire Tea.

Some commenters called for a boycott on the indisputably scientific grounds that, ‘if a person I dislike enjoys this tea, I can’t possibly enjoy it’, while others flat out accused the brand of striking an endorsement deal with the Tory government. Step aside, Kardashians! It turns out that politicians are the most desirable influencers on social media.

Yorkshire Tea’s social media marketing team was quick to respond, by tweeting: “Nothing to do with us – people of all political stripes like our brew. Plus there’s no way we’d intentionally stick ourselves in a Twitter storm on a Friday afternoon. It’s nearly hometime!” 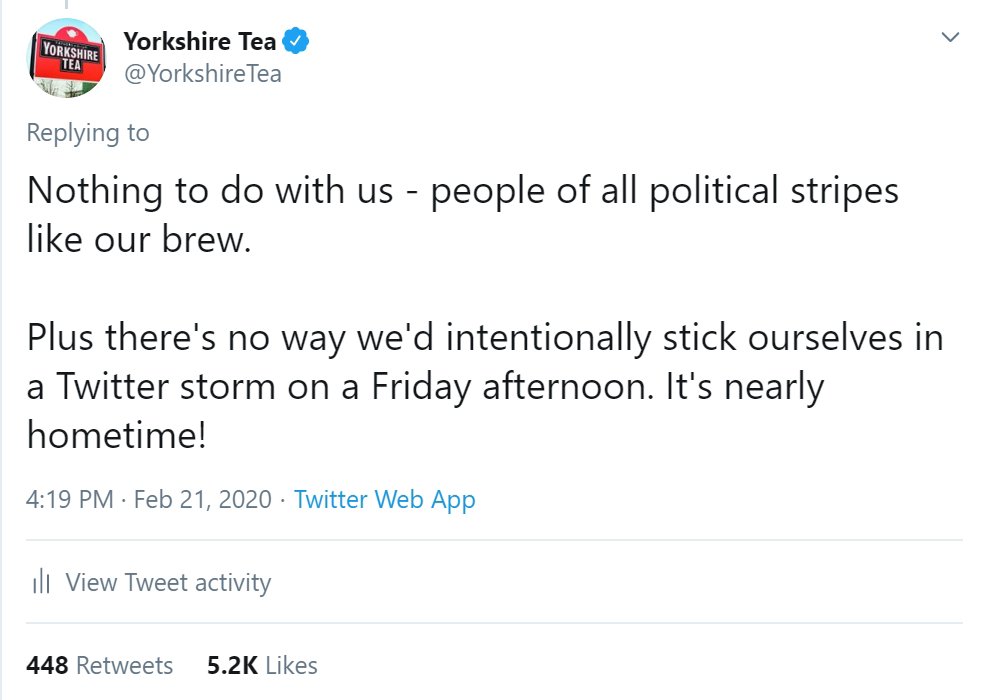 This tweet conveyed the important information, but humanised it with a light-touch joke in the brand’s tone of voice — a fine example of funny social media customer service.

However, this did little to slow the onslaught, and the negative brand mentions continued to stack up over the weekend…

On Monday morning, presumably immediately following a panic meeting and many a strong cuppa, @YorkshireTea tweeted a thread summarising their ‘rough weekend’. They included screenshots of all the action and, in an echo of the recent #BeKind hashtag that’s been trending in the wake of Caroline Flack’s tragic death, urged social media users to ‘try to be kind’. 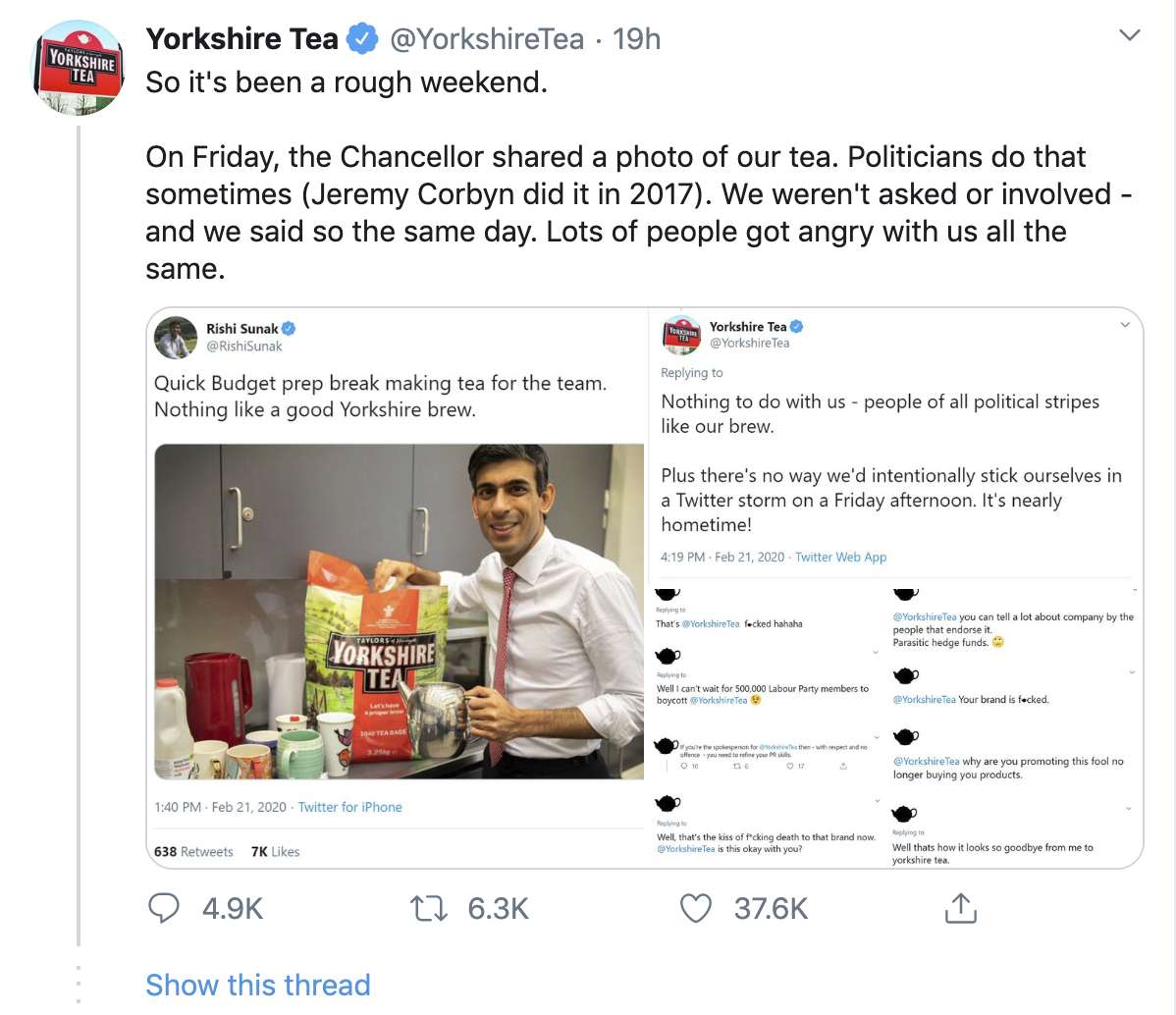 This response reads as sincere. Aside from their initial tweet on Friday afternoon, they haven’t tried to be funny. We know they’re more than capable of funny (more on this later), but the team behind the tweets identified that sincerity and openness would play better here.

Now, numbers aren’t everything. We’re in no way insinuating that Yorkshire Tea’s response was overly calculated or anything less than genuine, and we wholeheartedly endorse the positive message they’ve chosen to use their moment in the spotlight to promote.

BUT, when you’re trying to convey a brand message to the widest possible audience (whether it’s about the launch of a new product, or more of a damage control situation like this) numbers matter. We live in a Black Mirror episode, after all.

At the time of writing, the first tweet in the thread is sitting happily around the 38K likes mark, and the last (with its wholesome parting message) at a whopping 46K! By contrast, the photo that triggered the whole palaver has less than a quarter of the likes, and is lagging by over a thousand comments. BOOM.

*Insert middle finger up emoji aimed at Rishi Sunak and everyone who had a pop at Yorkshire Tea…just don’t forget to delete this text afterwards.*

True, the overall impact on the brand will be hard to measure — especially so soon after what we’re sure will henceforth be known at Yorkshire Tea HQ as ‘the incident’. But the social media team did all they could, and the available numbers suggest they took the best possible approach.

Of course, we’d expect nothing less from the Yorkshire Tea social media marketing team, whose work we’ve been admiring for a while now.

Masters of the Craft

In our own bid to be kind, we decided to showcase some of the Yorkshire Tea team’s funniest recent work. In fact, we reckon they’re one of the funniest brands on social media.

Comedy comrades on the Yorkshire Tea social media marketing team — we salute you!

1.So many brands posted half-arsed attempts at the #DollyPartonChallenge. While not one of their highest performing tweets, YT showed their comedy chops and went the extra mile.

Get you a tea that can do it all. #dollypartonchallenge pic.twitter.com/BiPTDWjz3T

2. Oh, the innocence. Just a few weeks prior to ‘Tory-gate’, this gentle little joke scored great engagement — which just goes to show how cultivating your brand’s playful tone of voice and tailoring content to the sensibilities of your specific audience can deliver results.

It's horrid out there! Best just stay indoors and drink tea all day.

3. We loved this animated video and accompanying hashtag campaign that YT put out for ‘National Tea Day’ last year. Apparently, a teapot emoji will be launched in March 2020, so we can only assume that YT will be producing a celebratory follow-up video (if you’re reading this, YT, we’d love to help you script it).

We, the people, demand a true tea emoji!

No longer will we sit idly by, sending tiny pictures of green 🍵 or very dark brown ☕️ hot drinks.

We are a nation of tea drinkers. It is #NationalTeaDay. It's time to make a stand.

And remember, try to be kind out there.