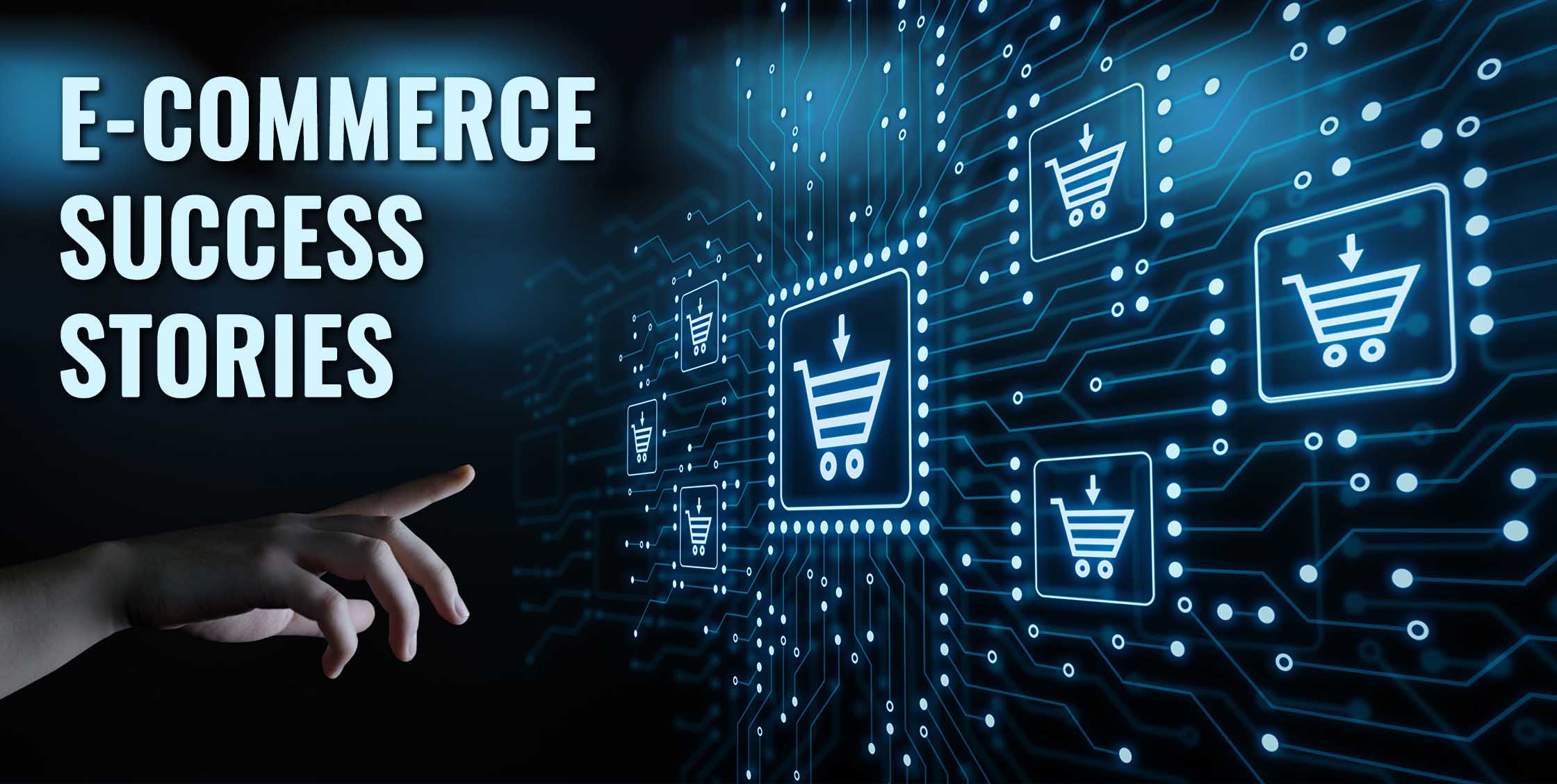 Whether you’re just starting out in digital marketing, or you’re a digital marketing professional looking to optimise your existing e-commerce businesses, it’s important to keep developing your skills. One of the best ways to do this is learn from the successes of other entrepreneurs and marketers!

We’ve compiled five of the best digital marketing e-commerce success stories we could find. Read on to be inspired and pick up tried-and-tested tactics to incorporate into your marketing strategy. 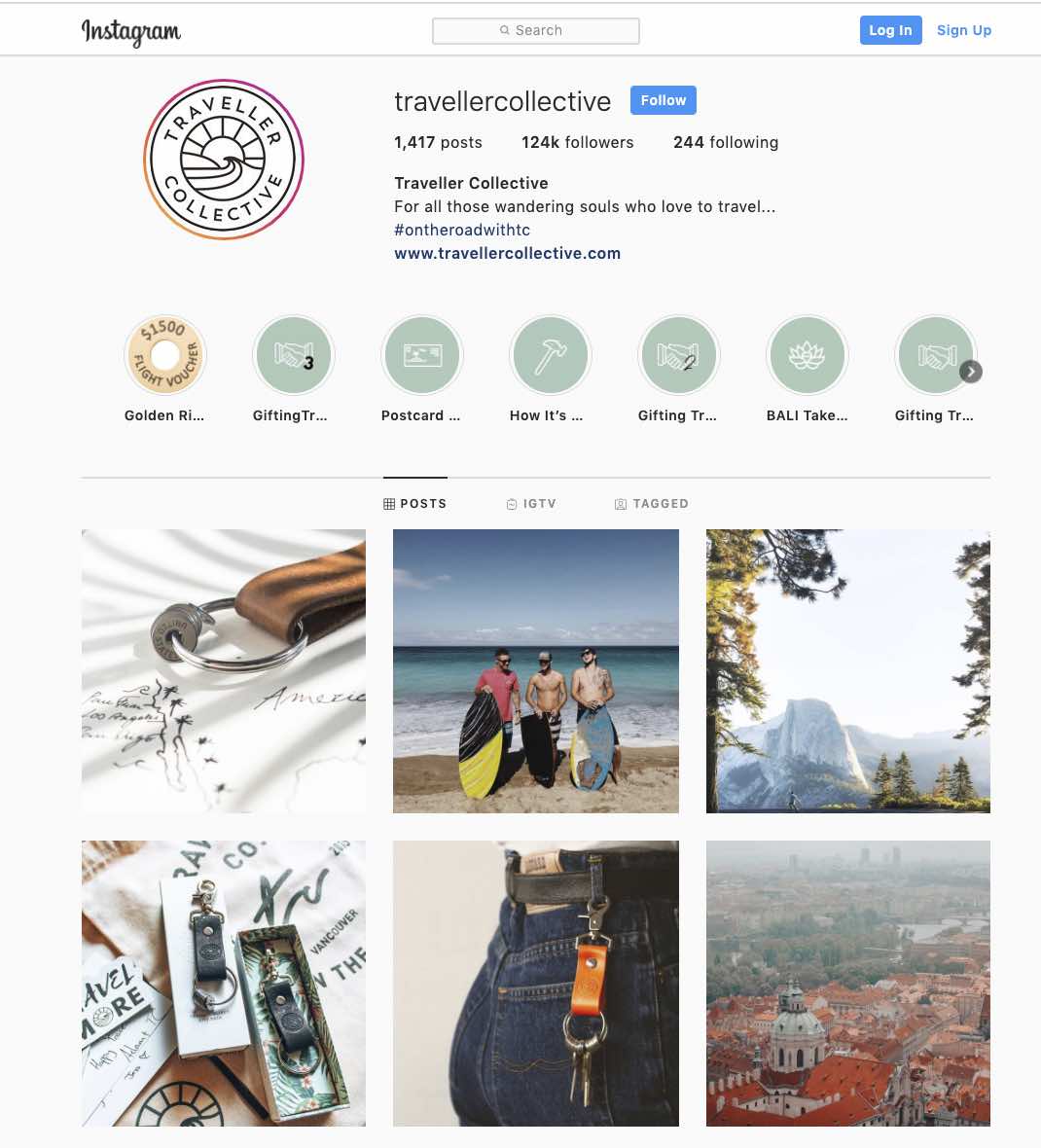 This brand is a fantastic case study in social media marketing. Traveller Collective produces engraved rings representing every country in the world. Travellers can collect these to display on a clip or necklace , and a percentage of their purchase goes towards a charitable project.

Over ten thousand people from more than one hundred countries have bought Traveller Collective products, and this success can be attributed to their use of social media. Firstly, they’ve identified which social media platforms are relevant to their audience. They have a Twitter account, but they know their ideal customers spend more time on Facebook and, in particular, Instagram — so that’s where they concentrate their efforts.

Traveller Collective has done a great job of encouraging and cultivating user-generated content on these platforms. They regularly share customer photos on Instagram, and encourage users to tag travel photos with the branded hashtag #ontheroadwithtc. This hashtag gas been used more than 5,000 times.

User-generated content provides massive ‘social proof’ for the brand. When other social media users see Traveller Collective’s adverts and original content, they are already primed to have a positive perception of the brand — this leads to increased conversion rates. The brand also runs an ambassador program, working with influencers to help them spread their message to new audiences.

Of course, it helps that the product and brand ethos have been specifically designed to encourage social sharing. Instagram has always been a place where people go to share their travel experiences and feel like they are part of a global community.  Successful business models are increasingly built from the ground up with Instagram in mind, and Traveller Collective is no exception. 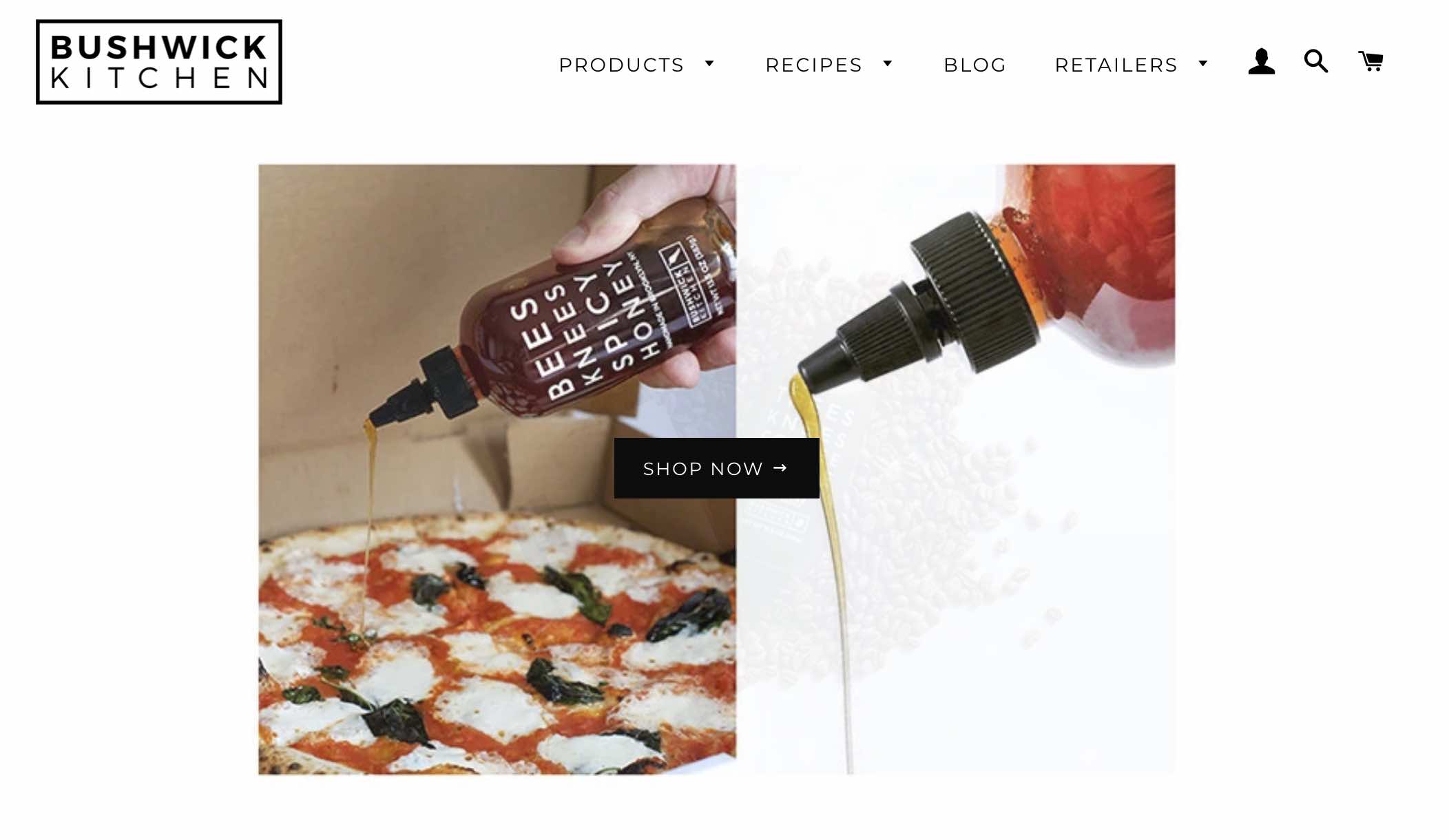 Originally called MixedMade, this hot sauce company started out as a 30-day small business challenge for entrepreneurs Casey Elsass and Morgan Newman. Their first product — honey infused with chilli flakes — generated $170,000 in sales in just ten months. Having demonstrated that this could be a successful business, they diversified their product offering and rebranded as Bushwick Kitchen.

So how did they achieve those initial sales? Firstly, they secured $500 of pre-sales by setting up a basic online store consisting of a single product page with photoshopped images of the product (which didn’t yet exist) and a price based on their estimated costs.  Once they had started producing the product, they began email marketing to 400 friends and select contacts, employing a very casual and persuasive tone of voice to encourage them to support their new commerce business.

The bulk of their sales came as a result of a sustained press campaign. Bees Knees Spicy Honey featured in blog posts on foodie websites such as Kitchn, Grub Street and Uncrate — leading to a 500% increase in sales. Casey sought to build genuine, mutually supportive relationships with press contacts. He also made is as easy as possible for them to produce perfect content marketing for the brand, by providing readymade content  — he wouldn’t just send images and story ideas, but also suggested copy!

When Michael Rubin founded Dollar Shave Club, it was a one-dollar-a-month razor subscription service. They’ve since adjusted the pricing and expanded the product range, but have remained true to their intention — to make shaving simple. The company was acquired by Unilever for a tidy $1 billion.

It all started with a viral video. The now-iconic advert (called ‘Our Blades Are F***ing Great’) starred Rubin himself walking through the warehouse and making gag-packed boasts about their services. It layered funny lines with visual comedy, and left the viewer in no doubt that this was a bold new brand that meant business.

The ad only cost $4,500, took one day to shoot, and wasn’t the result of a marketing agency brainstorming session. Rubin studied improv comedy at the Upright Citizen’s Brigade and has always known that comedy ‘is a very powerful device in telling a story’. He was right, of course, and the ad now has 26 million views on YouTube.

Now, we’re not going to claim that their success is entirely thanks to the power of comedy marketing — we’re sure the razors are pretty good too — but making people laugh indisputably played a massive role in Dollar Shave Club’s early success. Rubin knew that a distinctive, funny tone of voice would set them apart from competitors in the sector and make their content marketing campaigns highly shareable on social media.

They carried the video’s visual style and tone of voice across all marketing channels, including email campaigns and product pages, to ensure a cohesive brand image. That was eight years ago, and comedy has remained a central part of Dollar Shave Club’s digital marketing in the long term. 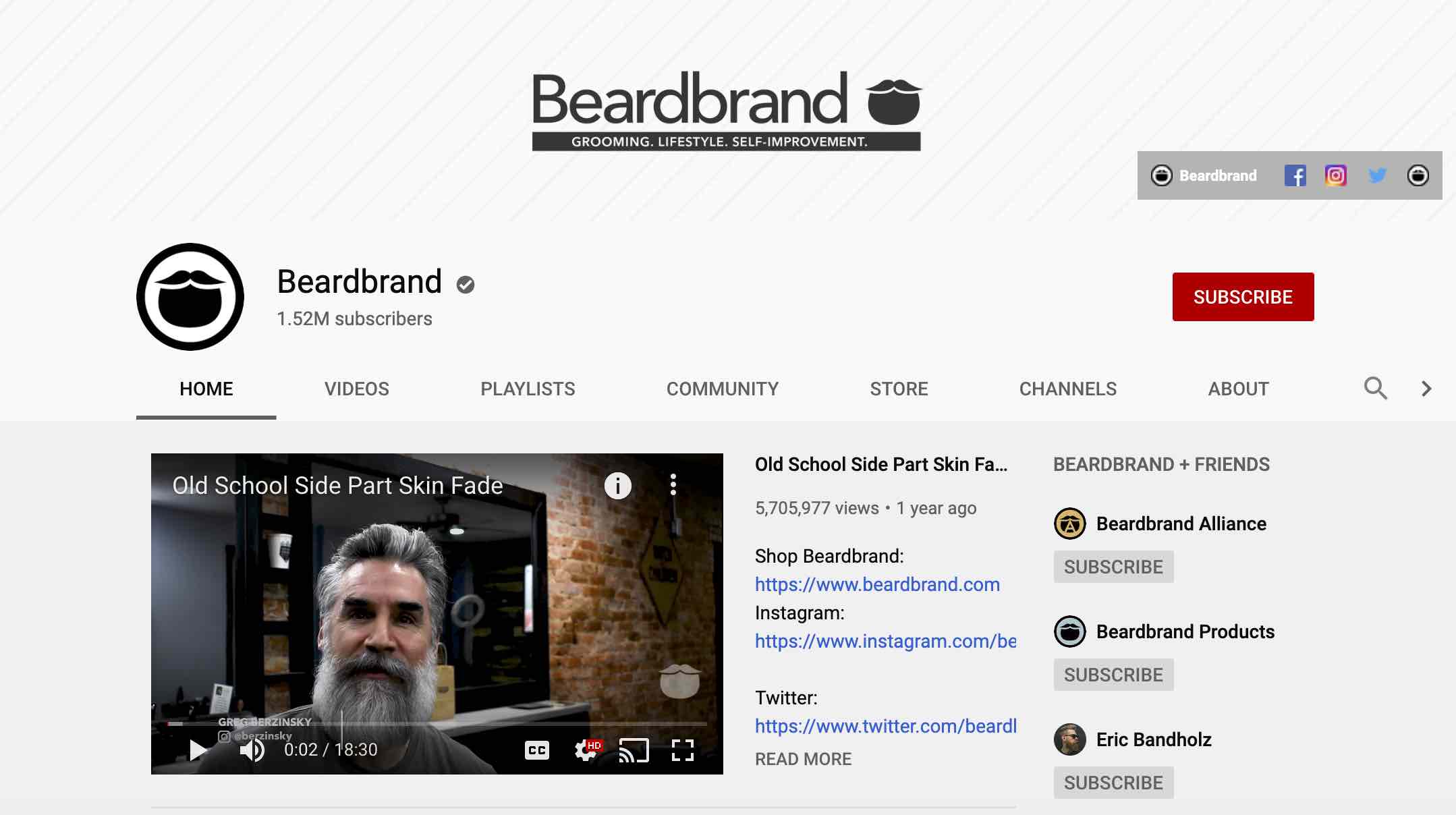 Sticking with facial hair, let’s take a look at BeardBrand. Pop the name into your nearest search engine and you’ll quickly see this is a brand with a massive following across several platforms: 19k followers on Twitter, 160.6k on Instagram and, on YouTube (where brands typically have an account to dump videos they want to embed elsewhere, but rarely build massive followings) they’ve got 1.52 million subscribers.

With BeardBrand boasting thousands of dollars in sales each day, it’s clear that massive brand awareness can convert to financial success. But how did they build such popularity in the first place?

When Eric Bandholz founded the business in 2012, it wasn’t an ecommerce business at all — he was writing blog posts and creating YouTube videos about male grooming. Essentially, he was content marketing before he had any products to market. When he launched his first products the following year (after his blog had been featured in the New York Times), he had already built a sizeable and invested audience.

By creating free quality content that provokes interaction, successful brands make customers feel like part of a community — rather than just a credit card and an online shopping cart. 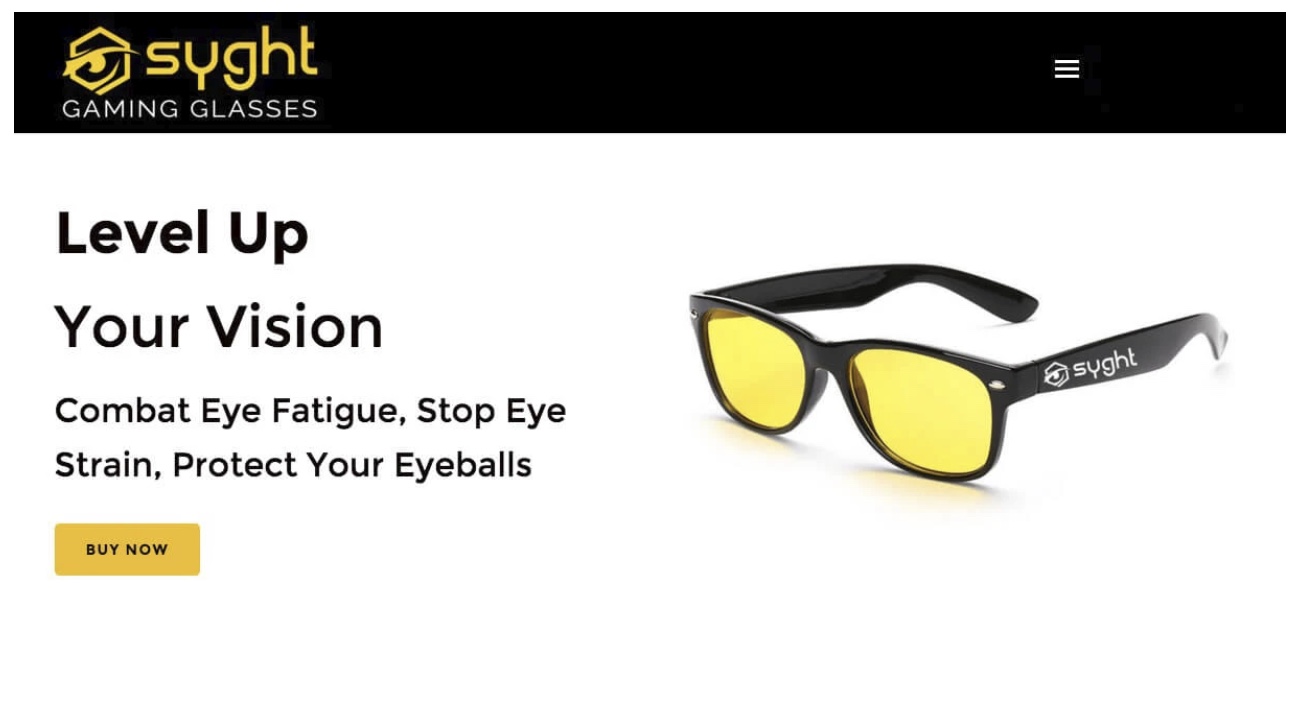 Here’s one you probably won’t have heard of — but if you know anything about ecommerce stores, you’ll have heard of the Shopify platform.

Shopify regularly challenges its employees to build ecommerce businesses from scratch. Given that these people are full time employed to become experts on commerce stores and digital marketing strategies, the rest of us can learn a lot by looking at how they perform in these challenges.

Syght Glasses is the result of one such challenge. Corey Ferreira started marketing blue-light blocking glasses to gamers, and made over $2,000 in five weeks. He achieved this through a combination of digital marketing tactics, including using Facebook to run retargeting ads — which is one of the best ways to secure sales lost through cart abandonment.

However, he brought in most of his sales via affiliate marketing. Corey contacted gaming influencers on YouTube and Twitch to invite them to his affiliate program, which allowed them to earn $10 for each pair of glasses sold using their unique discount code. Collaborating with influencers on a commission basis is vastly preferable to paying upfront for a product shoutout, particularly for small businesses. This way, he didn’t have to pay anything to influencers who didn’t bring in any sales.

The best thing about this particular case study is that Corey himself wrote about it in-depth — from initial product selection to design, ad campaigns, and things he would’ve done differently. It’s also worth reading Shopify Growth Team member Richard Lazezzera’s insanely detailed account of how he built clothing brand Finch Goods.

Which case study inspires you the most? Which digital marketing strategies can you see working for your e-commerce business?

For even more inspiring case studies, Google online marketing challenges — and if Dollar Shave Club’s funny approach to video marketing got you thinking, it’s time to learn how comedy content can kickstart your own small business success story. Consider this your online marketing classroom!