What my JSFP can teach you about your socials 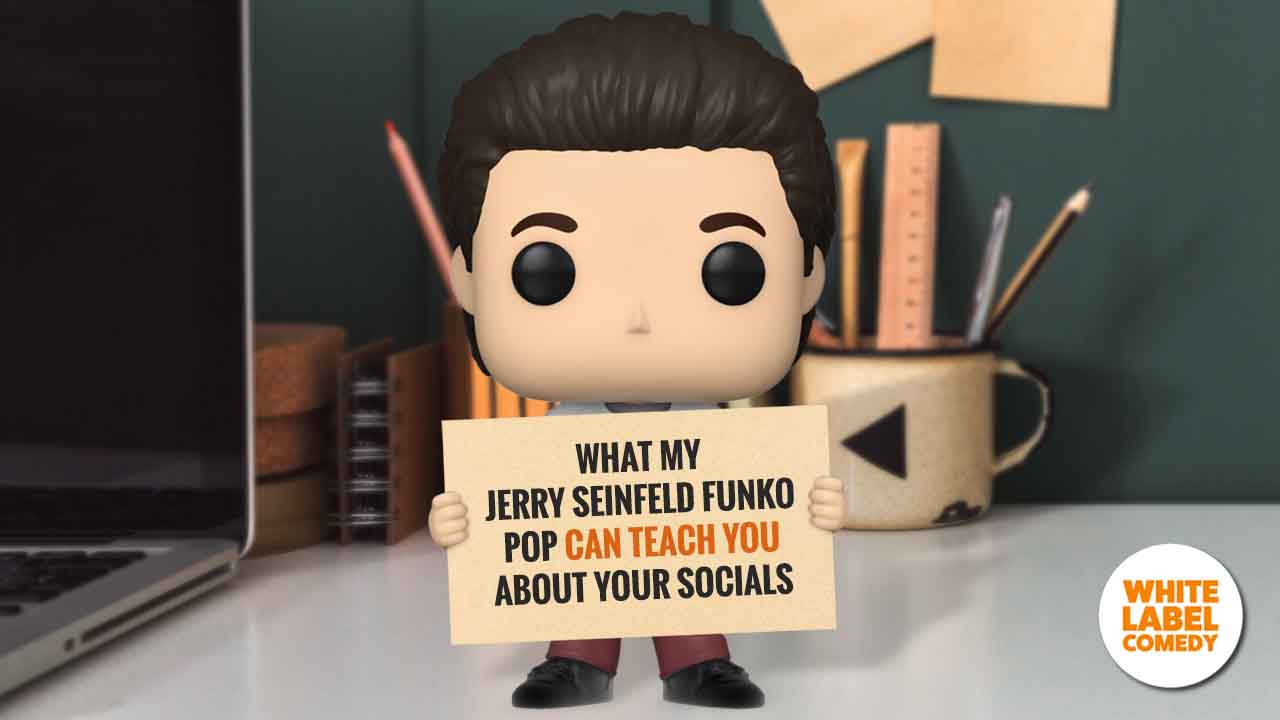 “Oooh! That’s pretty sweet. Where’d you get it?”

That’s what everyone says when they see my Jerry Seinfeld.

He’s not the real Jerry Seinfeld.

Microphone, 80s hair… this little plastic toy looks just like him. Except…

He has a truly massive head.

And whenever anyone comes over, they clock it straight away and say some variation of “that’s the coolest thing I’ve ever seen in my goddamn life”.

They invariably pick it up, take a good look, and ask about it. Sometimes they ask “why does Jerry have such an enormous head?” and I reply “no idea, but it’s cool, isn’t it?”

I have plenty of other pieces of art – yes, ART – around the house, but nothing gets attention like my Jerry Seinfeld Funko Pop.

And it’s because it’s in the ‘sweet spot’.

It’s unique enough to stand out and get attention.

It’s a heightened, over the top version of something they already know and love. (Or at least, you know, know).

And – unlike my George Costanza-themed combination pinball machine and Slush Puppy dispenser – it’s not so different that you think “that’s just nonsense” and dismiss it.

Jerry is different enough to get noticed, but normal enough to still be cool.

And that’s how your social media account should be.

Entertain enough to stand out.

But don’t make jokes for the sake of it and start being silly.

Give your audience insights that help solve their problems and wrap them in jokes that get attention and make your posts (and your brand) stand out.

Doing so will have your potential customers flocking to your socials and not just becoming fans of your posts but excited to get to know your products and services too.

I suggest you pick up a copy of The Social Success Machine Blueprint and Masterclass while the launch offer is still live.

It won’t turn you into the world’s most famous stand-up comic. But it will reveal the 12 types of Relatable Truth that you can use to create all kinds of content to hit that ‘sweet spot’…

Ready to strap a jetpack to your socials?

While it’s still on offer, you can get it for less than an injection-moulded Jerry Seinfeld here:
https://whitelabelcomedy.com/tssm-blueprint-masterclass

Advertising Creative, Copywriter, TV Producer, Comedy Writer and the Founder and Creative Director of White Label Comedy
PrevPreviousThe 100 most successful social media accounts
NextLessons from one of the greatest admen of all timeNext