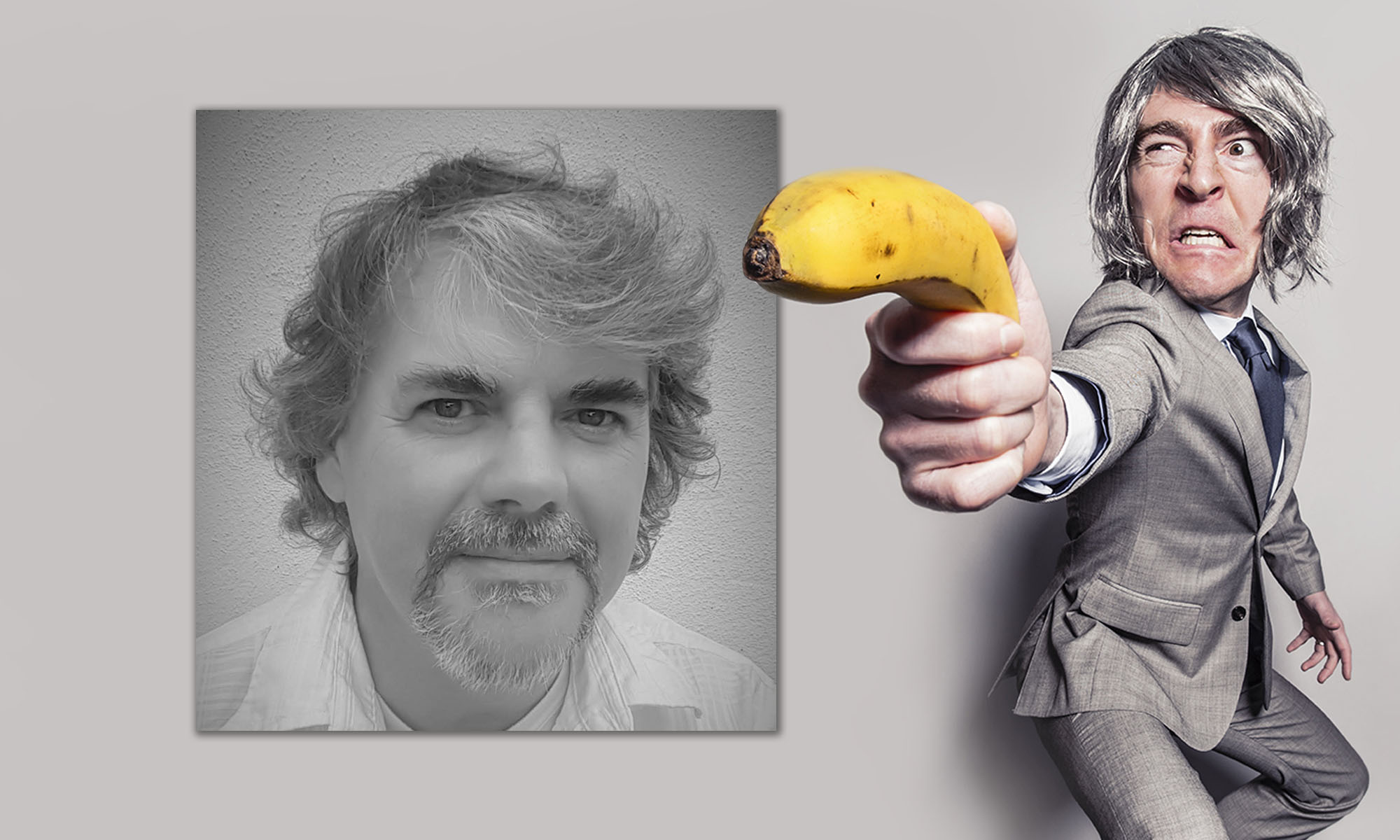 White Label Comedy is a Creative Agency powered by a hive mind of Comedy Writers and Advertising Copywriters – working together to create comedy content that’s on-brand, on-message, and sells.

We’re the writers room that lives in your back pocket – and if you’re going to invite us to move in (or, you know, hire us), we should probably all get to know each other first. So each week we’ll be introducing you to another member of the White Label Comedy team.

In focus this week – the very funny Trevor Rudge 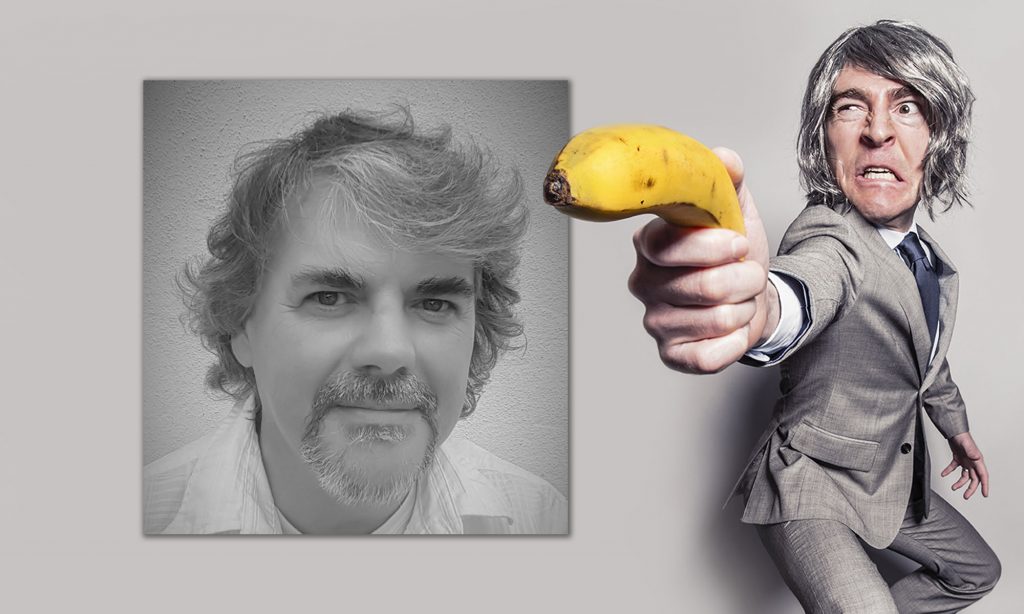 WLM: What’s your comedy background, outside of White Label?

TR: I am relatively new to the comedy writing world, but I have always loved comedy and studied it’s history. I did have a little bit of success in the late nineties/early noughties with a string of characters on Terry Wogan’s BBC Radio Two breakfast show ‘Wake Up To Wogan’. The most infamous was a German, that wrote in pigeon German complaining (or gloating) about the state of British affairs. I did that for about six years, but never realised the impact that my material was having, until (after the third time of being asked) I attended a listener convention in Swansea for Terry’s programme. It was then I suddenly realised, six million other people were listening to my gibberish and even more astonishing they liked it. What did I do with that success? Nothing, absolutely nothing. I stopped writing into Terry’s programme in 2004 and I got on with a succession mostly miserable (but secure), salaried ‘day jobs’.

I got reinvigorated again in 2018 I had an idea for a comedy project I am still working on. Bouncing the idea off my wife, she told me ‘Write it. Before someone else does’, (who incidentally has been utterly frustrated by my writing inactivity, especially as we met at the above-mentioned Terry Wogan Convention). So on Friday afternoon’s, I would find a corner in the local pub and just write for a few hours. It was then I discovered ‘Newsjack’ on BBC Radio 4 Extra and started to regularly contribute. The muscles were working again. One Friday afternoon, whilst busily tapping away on my laptop, the manager asked me ‘Are you a writer?’. I paused, thought about it and then simply replied ‘Yes. I guess I am’. Now, when anyone asks what I do, I tell them I am a comedy writer. It’s very interesting the avenues that now opens up.

WLM: How would you sum up the White Label ‘process’? And what does it offer our clients that they wouldn’t be able to get elsewhere?

TR: The White Label process operates in a virtual collaborative environment. It’s encouraging, multi-iterative, and most importantly fun. I find it a little like an iceberg, in that, there is the visible part (what the client sees delivered) but underneath the surface there has been a significant amount of brain storming, idea suggesting and gag refining, from all the other creators. And it’s fast, really fast. There are some seriously talented, quick-witted, comedy writers involved and the sheer number of ideas that get generated is astonishing, as is the quality of the output.

That multi-collaborative approach, results in something that is rich in content and influenced by many styles. The demographic of White Label Comedy writers is broad, too, enabling us to hit many target points, from many areas of personal experience, that a smaller team would be unable to achieve. If someone has a great idea, it’s then polished and made funnier. We generate original, funny, unique humour, in double-quick time.

TR: I’ve enjoyed all the briefs I’ve worked on so far, having an end goal, objective and more importantly, an audience for our work, I find really motivating. I just like making people laugh.

WLM: What do you get from being a part of White Label?

TR: Writing can be a lonely business some days, but with White Label there is always a chance to collaborate on a piece of work and also get some immediate feedback from my peers. It also brings a little bit of daily contact with like-minded people and provides some goals/structure to my work. Being in on the project so early is also quite exciting and seeing the business grow is very rewarding as well.

WLM: What’s been your favourite White Label moment so far?

TR: I love the creativity when we get a new assignment and seeing all the new ideas the writers propose come to fruition, however I will have to say that seeing our first piece broadcast on National television will take some beating, especially with some of my material left in the edit.

WLM: What else are you up to, outside of White Label?

TR: I write regularly for White Label’s, sister project “The News Dump”, but I am also working on several individual projects currently and getting them to state where I can hopefully present them to a production company, or an agent. I also submit material to BBC 4 Extra’s “NewsJack” and I recently got added to the writers list for BBC Radio Scotland’s “Breaking the News”.

WLM: Outside of our White Label projects, are there any examples of comedy and advertising coming together that make good touch-points when coming up with new ideas?

Joe and Petunia – Coastguard
Not strictly a commercial but a Public Information Film. A fabulous example of humour being used to get over a really serious message. Joe completely misreads the dire situation, whilst having the most banal conversation with his equally oblivious wife. There is then a moment of realisation, before the conclusion. It’s a classic three act story, in one minute and over fifty years on, still funny.

Birdseye Steakhouse Grills – We Hope It’s Chips
In my view, music gives comedy repeatability. Parody music brings instant familiarity. Add an everyday situation (in this instance, burly workmen dreaming of their tea), with a bit of close quarter choreography and this is the result. “We hope it’s chips, it’s chips” has been a personal earworm ever since.

John Smiths Bitter – Acrobatic Dog
I’m not advocating giving dogs alcolhol, the product could be replaced with anything (almost), but he concept of a highly intelligent dog, that will do anything (and seemingly does) for a reward, is one many pet owners will identify with. The use of puppetry and props, is just fabulous.

Heat Electric – Creature Comforts (Pablo The Parrot)
The Creature Comforts series of advertisements involved interviewing real people about their home heating and then the animators would come up with the concept of matching their words with stop motion clay puppets/models. I particularly like this one because of the ‘silent’ parrot trying to get a word in edgeways and the sheer range of emotions portrayed by the facial expression. It’s a surreal concept, executed with a brilliant visual, where the words of the ad are completely straight.

Talking Pages – Gabrielle Drake and John Cleese
What appeals to me about this is that it is typically British. Chaos ensuing all around, reacted to with that stoic ‘Stiff Upper Lip Approach’ by John Cleese and Gabrielle Drake. The emergency is also exaggerated beyond reality. There are some fabulous visuals (look out for the swimming dog) and the fish tank gag is tied in beautifully.

TR: Personally, the whole ‘White Label Comedy’ experience has just been amazing. This opportunity came along at just the right time for myself, as someone who was getting back into the world of writing again. It’s enabled me to network and ‘rub shoulders’ with some really talented writers, whilst being able to showcase my own work.

Want to talk about how Trevor and the rest of the White Label Hive Mind can help your brand find its funny? Get in touch!