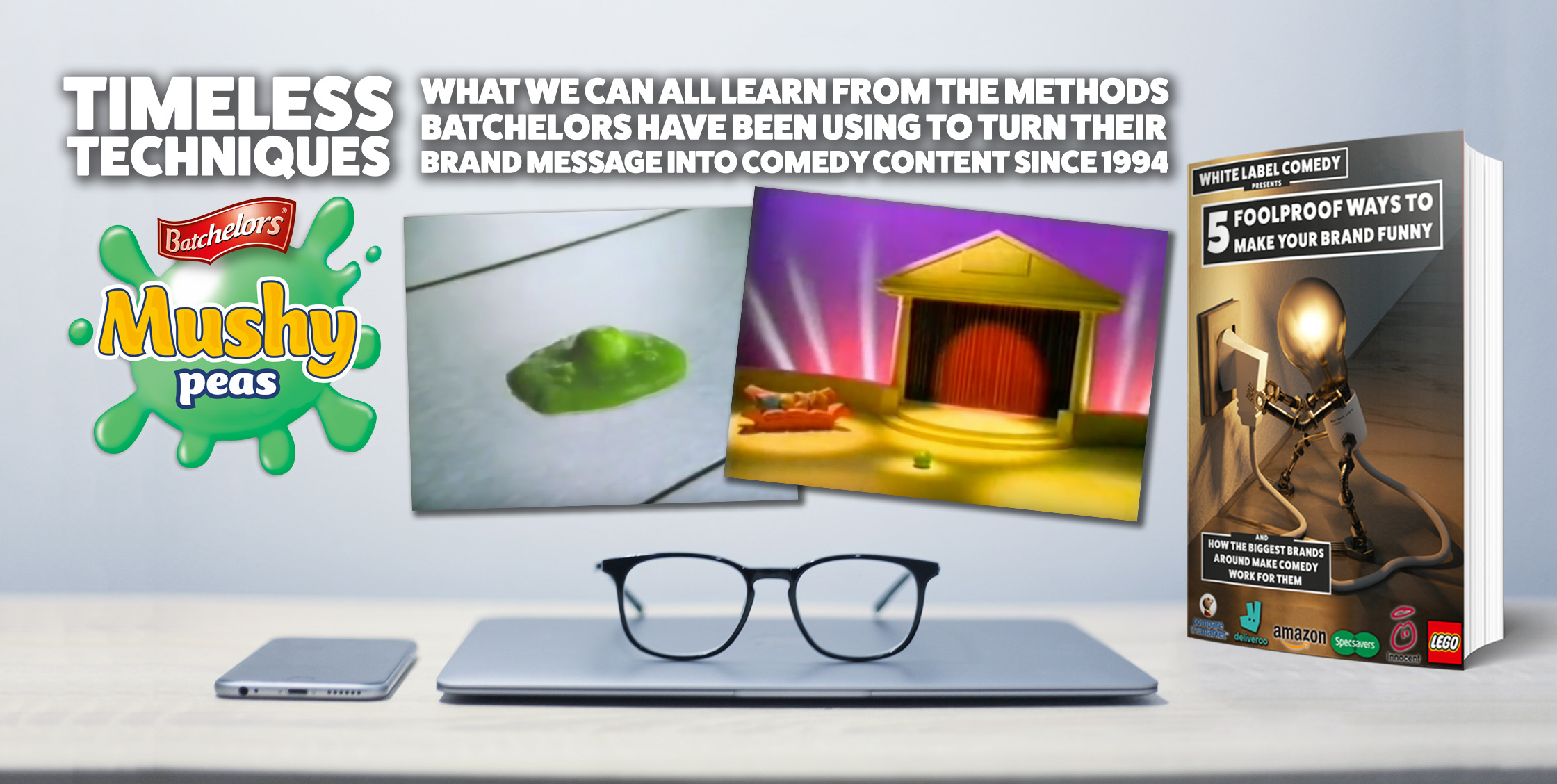 I often find myself wondering just how much the use of humour in advertising has changed over the years – and today, I stumbled upon an advert from 25 years ago that tells me the answer to that question is “barely at all”.

Bachelors use comedy to sell on their Mushy Peas

Batchelor’s Mushy Peas first ever TV spot was only the second ever advert aired on British television – so it’s safe to say these guys have been in it from the very beginning.

Back then, they had the singing superstars of their day “The Gaunt Brothers” at the piano – with a song about “Batchelor’s Wonderful Peas”.

A jolly song. Not particularly inventive – but back in the 50s it was much easier to get consumers attention. We aren’t bombarded from all angles every 6 seconds like we are now. Back then, if you made an advert (any advert) and put it on TV – you could be damn certain people would actually watch it.

By the mid-90s though, it had become exponentially harder to get anyone to pay attention to anything – so brands had to get inventive. Batchelor’s realised they needed a new approach.

And here it is in action:

Such a simple advert – and it wouldn’t have cost them much to make – but I can remember watching it back then and demanding mushy peas, so it definitely had genuine impact on sales (even if it was just that one can that I tried, hated, and never asked for again).

The question is: can we break down what they did, so we know how to replicate their success ourselves?

(Luckily for you, the answer is: yes. Yes we can).

Here’s what they did.

1 – They found their “top-line” joke by using the oldest trick in the comedy writer’s play book – Wordplay.

They started with their brand (Batchelor’s Mushy Peas), and looked for words and phrases that could be misinterpreted (or re-interpreted) in order to change their meaning.

If you’re about to jump up on stage and tell jokes – pretty much anything is fair game. You can point the jokes in any direction, even straight at yourself, if it’ll get you a laugh.

Brands don’t have that luxury. They need the jokes to be pointing in the same direction as their brand message. And they also need those jokes to be inclusive, not divisive.

With that in mind – while they could’ve found a fun double meaning in the world Batchelor, they were right to go nowhere near it, or they’d have ended up with a funny advert that was distorting their brand message, and pitching their product to entirely the wrong audience.

They also could’ve found some aural wordplay in the word Peas (deliberately mis-hearing it as the word “Peace”, for instance). But that would’ve taken them down the wrong path too – leading them towards an advert that didn’t actually feature their product, the pea.

Thankfully they made the right choice, and focused on the double meaning of the word Mushy – which is, of course, used to describe the peas they sell, but has emotional connotations too.

2 – They turned that seed of an idea into an actual joke – by using a technique Late Night Talk Show gag writers have been leaning on since the dawn of television.

Wordplay can give you your funny idea – but it takes a little more work to turn it into an actual joke.

One of the easiest ways to crack that code? Ask a whole load of questions about your brand, and answer them through the lens of the funny idea.

Don’t fall into the trap of trying to make the questions themselves funny. Make them questions that someone might genuinely ask.

In this case, their question was: “How do we make our Peas so Mushy?”

And with our double meaning in mind, the answer is: “We remind them of the good old days until they cry”.

Notice that if you combine the question and the answer, you get the beginnings of a joke. “How do you make a Mushy Pea? Remind them of the good old days and make them cry”.

If that was the end of the road for the idea (if, for instance, it was one in a set of Twitter jokes we were writing) – the next step would be to sub it down, and edit the joke so that the punchline has maximum impact.

Instead – because it’s being turned into a TV Ad – the next step is actually to explode the joke, and make it something bigger and better.

There’s one final reason this Advert worked so well, and that is…

We’re used to having people try and sell us stuff. We’re savvy. Our guard stays up, unless you find a way to bring it down – and that was the case back in 1994, too.

Making someone laugh brings their guard down. It distracts them from the fact that they’re being sold to – and makes them more receptive to those key messages.

Notice how the beginning of the advert features peas, but it doesn’t feature any branding, any logos, or even any verbal mention of Batchelor’s.

The first time you see this Ad, you’re not just laughing before they’ve tried to sell you their product – you’re laughing before you’ve got any idea who’s products are about to be sold. \

You might not even know, for sure, that this is an advert.

It’s good enough to be a sketch in it’s own right.

If social media were a thing back in 1994 – this Ad would’ve ticked all the right boxes, and almost certainly gone viral.

And they did it all over again 3 years later

In 1997, Batchelor’s decided to build upon the success of their first funny advert – adding in some additional layers.

This advert uses the same techniques (Wordplay to get the idea, and Asking a Question tho write the joke), but it also layered a new technique on top – parody and pastiche – making this advert a spoof of a “This Is Your Life” style reunion show.

Do you want to use Comedy Content to engage your audience, make them love your brand, and get them ready to buy? You could hire a comedy writer. Or you could just download our free book!

We’ll walk you through five foolproof ways to turn your brand message into comedy content – and show you exactly how some of the world’s biggest brands have put those methods into practice, in ways you can easily replicate.

You’ll also get access to our free Email Mini-Course “How to write jokes that sell – in 280 characters or less”.

You’ll have everything you need to be able to master the techniques used by Batchelor’s (and thousands of big brands since) – and use them in your own marketing mix.

For your free copy, head to whitelabelcomedy.com/ebook