A brand whose content would travel further if it was funny 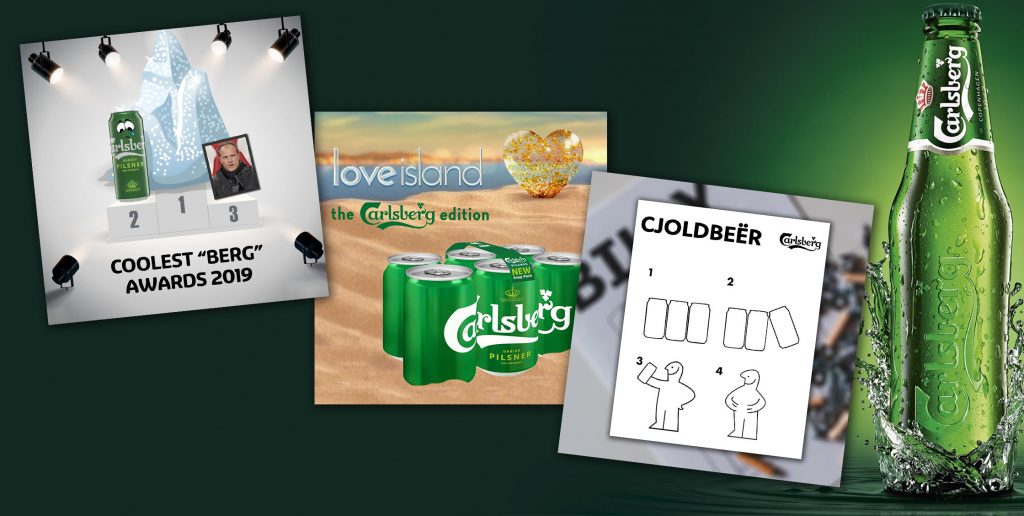 Ok, ok – before you all come racing towards us with your pitchforks at the ready – we know Carlsberg do sometimes do comedy (and they even, occasionally, do it well). But you’ll have to forgive us – their tagline was just begging to be co-opted.

This article isn’t about Carlsberg as a whole – but one specific campaign. One that barely made a dent – but could’ve done so much better if only they’d taken the same wit and warmth they’ve become known for in their TV spots, and applied it to their social media messaging too.

Let’s explore what would happen “if Carlsberg Did Comedy”.

The plastic rings used to keep a six pack of beers together were in the crosshairs of environmental campaigners decades before Greta Thunberg’s parents had even considered jumping into bed – so the fact that Carlsberg’s new Snap Packs solve the problem is massive.

The Danish brewery had a real opportunity here to get the world on side – scoring points from (and selling beers to) those of us who care about the planet. So that’s literally ALL of us except for Donald Trump. And maybe the Aliens from Mars Attacks.

With a goal this wide open – you can be sure they went big on this one, right? 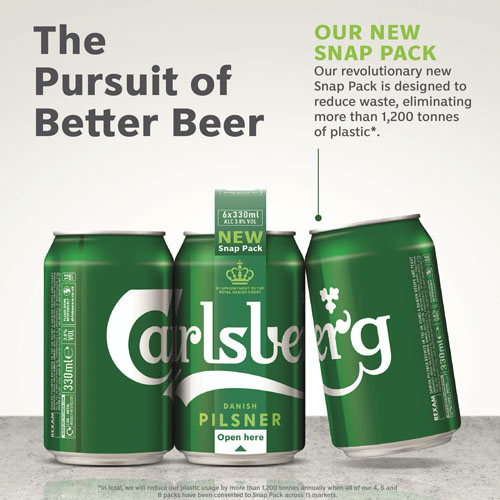 The invention was first announced to the world back in 2018 – and got a bit of positive press. But by 2019, when the Snap Packs finally hit the shelves, the world (or at least Carlsberg’s audience on social media) were struggling to care.

Almost 3.5 million followers on Facebook, and just 68 engagements in total. Wow. That’s more than just tumbleweed. That’s a wall of silence, built up around you, making sure nothing you say will ever be heard. 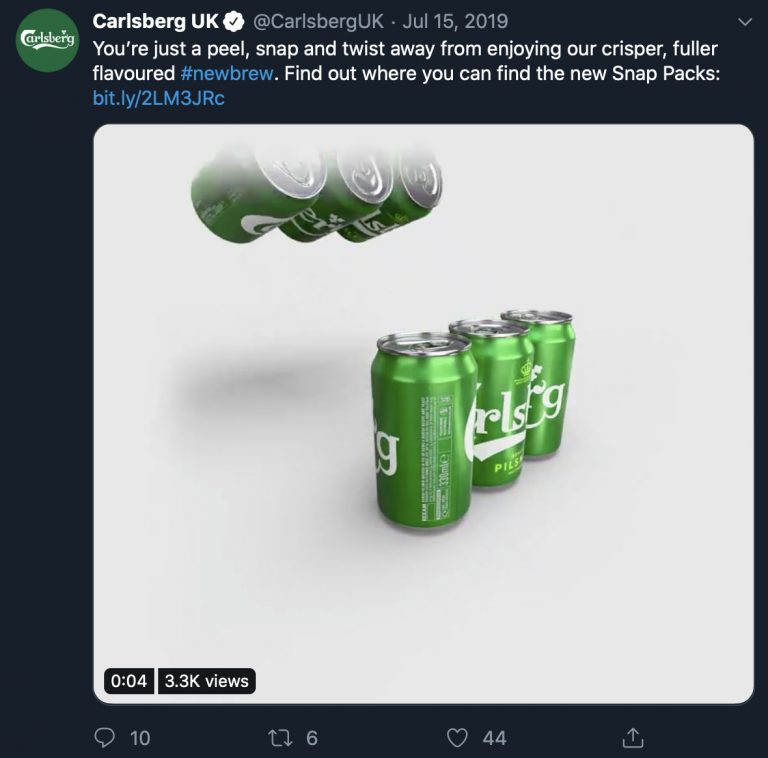 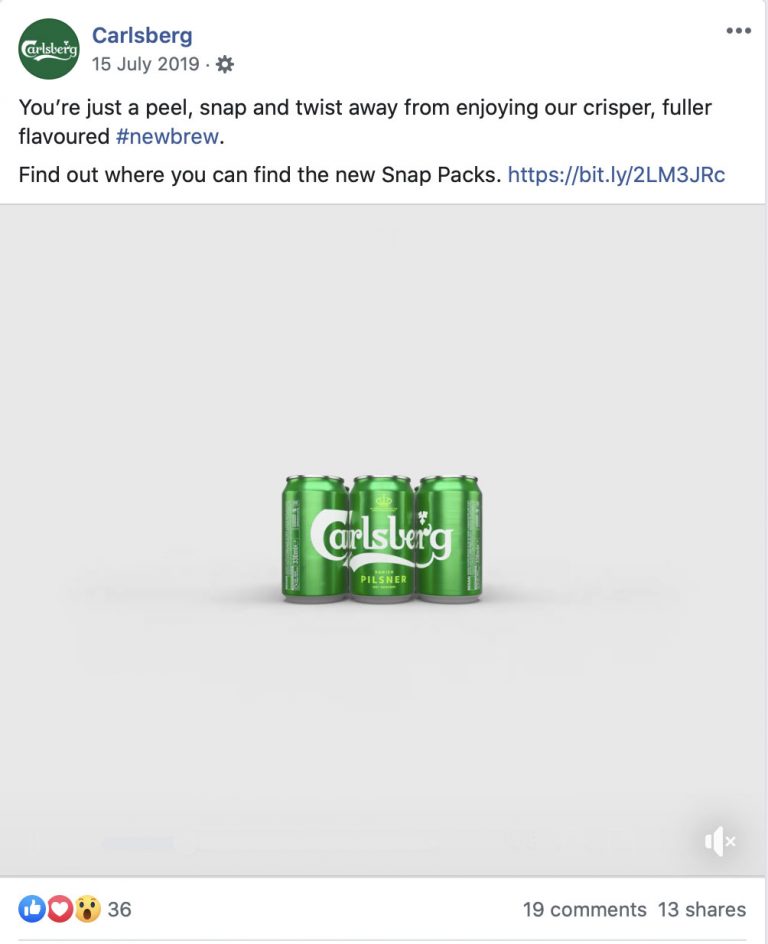 You can see from the numbers below that this did just as well. 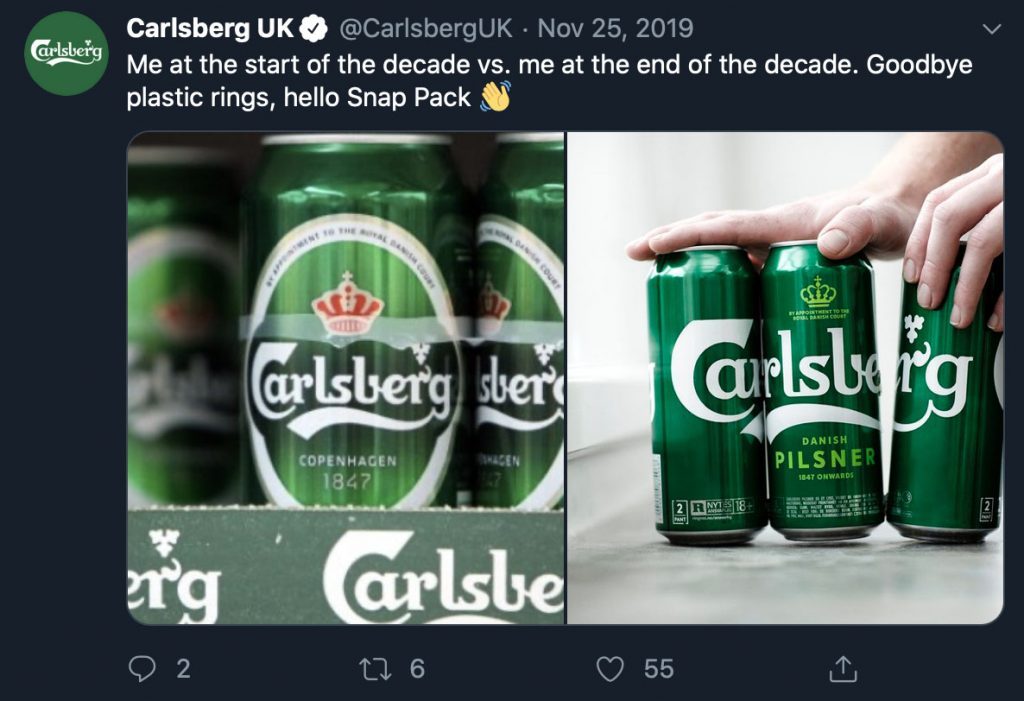 So why didn't it work?

Success on social media is no longer as simple as having a big following and broadcasting your brand message to them. You can’t just make dull announcements and expect us to care.

We’re used to having people try and sell us stuff. We’re savvy. Our guard stays up, unless you find a way to bring it down.

And that’s especially important on social – because no matter how big your following, if you put out content that people don’t engage with, its reach gets crushed by every single platform’s algorithm, and only the tiniest percentage of that audience you’ve spent so much time and money building up will ever actually see it.

what's the most effective way to engage your audience on social?

Making someone laugh brings their guard down. It distracts them from the fact that they’re being sold to – and makes them more receptive to those key messages. Plus – the ‘funny bit’ of any content is the bit that travels the furthest.

Imagine a world where not only have you got your sales message hidden just far enough below the surface that our guard stays down and we stay receptive – but the content also goes viral. Massive amplification.

That’s the world that comedy content can help you build.

if Carlsberg Did Comedy

Here's how their Snap Pack posts might have looked

Those of you who know White Label Comedy will already know what we’re all about – helping brands find the funny that already exists just below the surface of their brand messaging –  and turning it into comedy content that sells.

You’ll also know that when you hire White Label Comedy you’re hiring an entire hive-mind of the UK’s best comedy writers and advertising creatives, who collaborate on-demand to boost your brand.

We don’t wheel out the big guns for quick and dirty articles like this one, though. Instead, we ask just one writer at a time to give us a taste (just a taste) of what life might have been like for a brand if they’d been savvy enough to work with us on their content. For Carlsberg’s Snap Packs that one writer is the inimitable Alex MJ Smith.

If this is what we can do in a couple of hours, with just one writer and some rough and ready photoshopping – imagine how great life would be if you had our entire hive-mind, in your back pocket, ready to go to bat for you and your brand any time, anywhere. 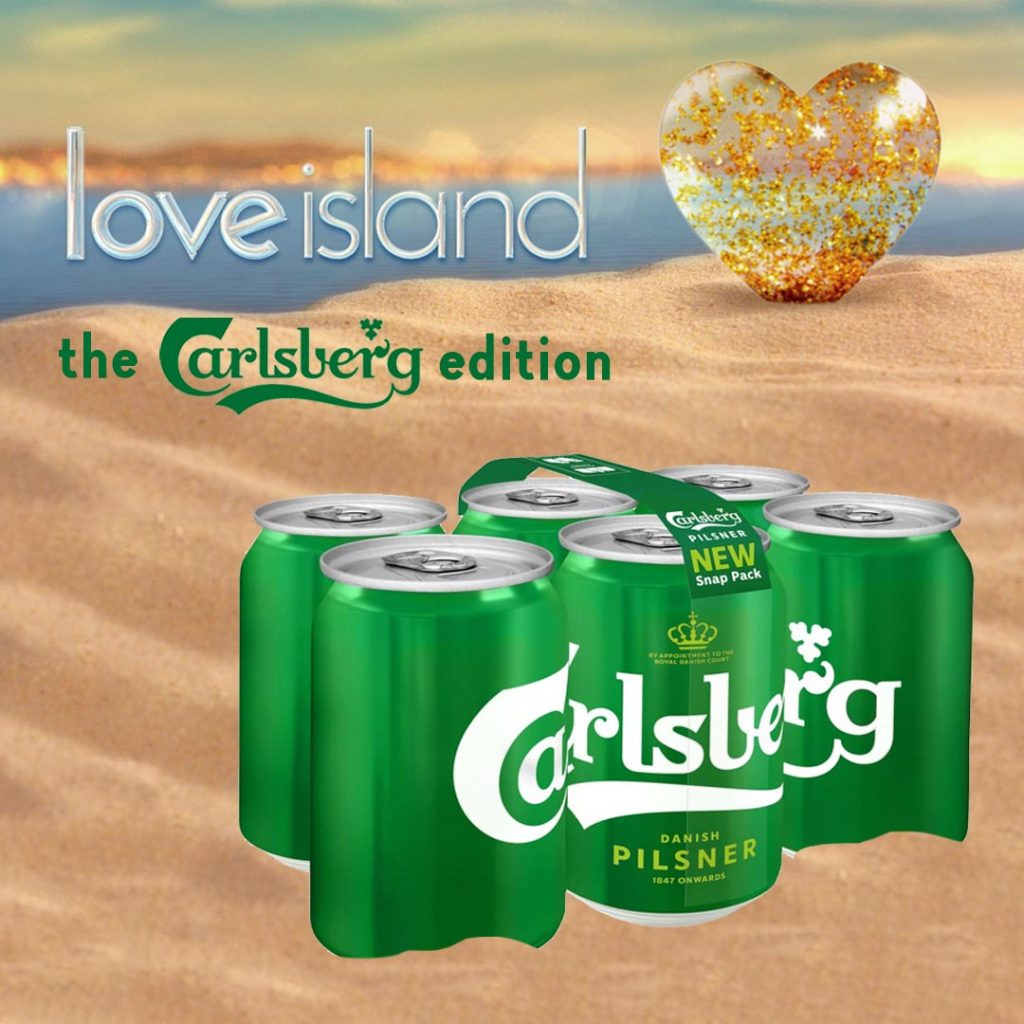 Being surrounded by glistening, naked six packs doesn’t need to be so awkward.

Carlsberg first released the Snap Packs at a time when Love Island’s lack of diversity, abundance of toxic masculinity, and impact on our body positivity were all huge on the news agenda. So a great way to gain traction would have been to take the glistening six packs that everyone was coming out against, and replace them with the glistening six pack that we’ve all now got even more great reasons to love.

If Carlsberg had hired us, we’d have probably photoshopped something a little more elaborate (a before and after showing a “real guy” surrounded by the Love Island cast, and the same “real guy” hanging out on the beach with some anthropomorphised Snap Pack Six Packs, maybe…) – but as this is just for fun, we’ve kept it simple. And that’s often the best way.

The key takeaway is that by jumping on board an issue that people have strong opinions about, and positioning your brand as the solution, it’s not just the joke that’s driving engagement and reach – it’s the people who agree with the message the joke is delivering, too.

You know – we’d have stood to gain from a bit more global warming.

But we’ve put our ambitions on hold to help save the planet. 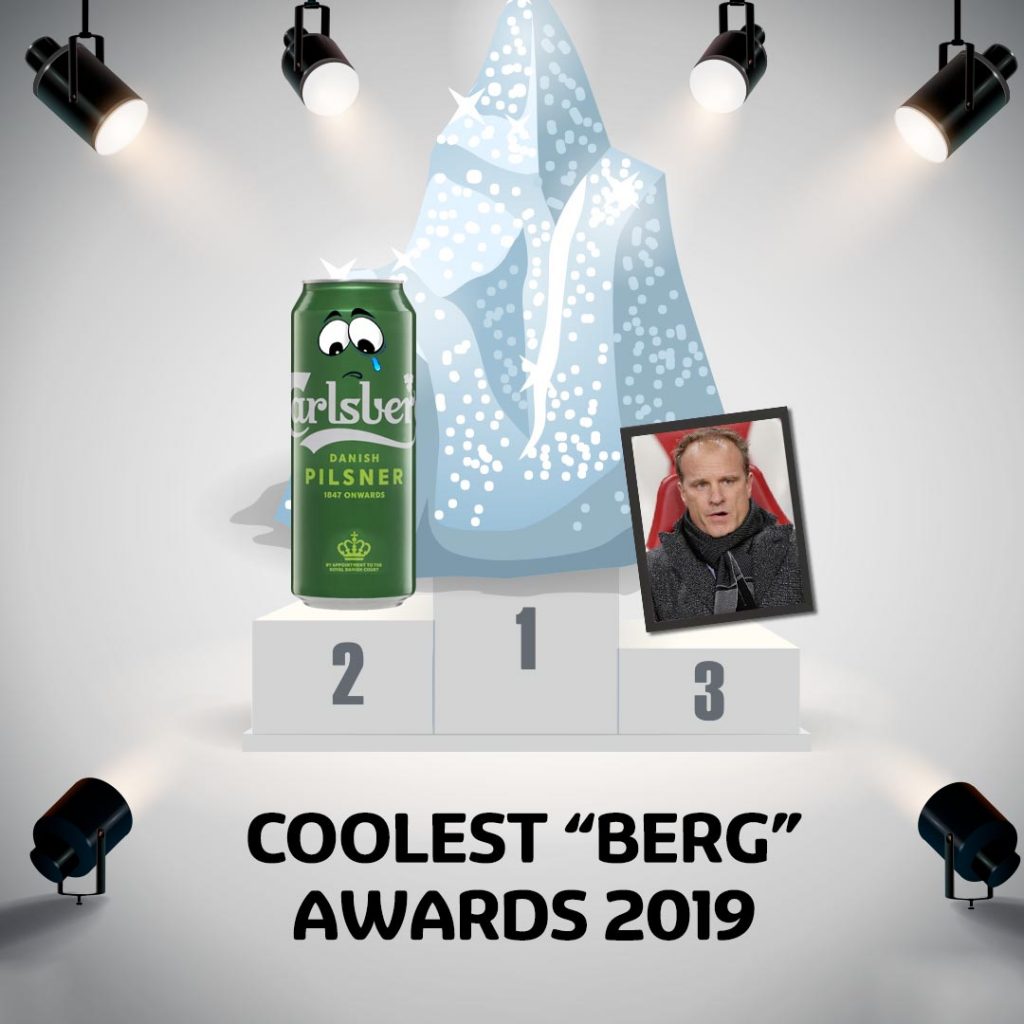 Another great route to a funny idea is false modesty.

It takes about 11 seconds of playing around with the different “handles” (associated ideas) of Carlsberg, Snap Packs, and the environment to realise that there’s almost certainly an opportunity for some satisfying wordplay that pairs “Carlsberg” with “Iceberg”.

When you pick apart comedy, it’s not really that complex – combine two seemingly separate ideas to reveal a “hidden truth” (and by truth we mean logically believable, not necessarily the gospel truth) – and you have yourself a joke.

Play around with Carlsberg and Iceberg long enough, and you’ll notice the hidden truth that if global warming was taken to its extreme, and we lost the Ice Caps, at least Carlsberg would “finally” be the coldest “‘berg” in the world.

All you need now to make this work is an angle that isn’t just amusing, but also emphasises just how great Carlsberg are for developing their snap packs.

We did that by making it clear that they’ve chosen the environment over their own (made up) potential for personal gain.

A great example of false modesty being used to boost a brand.

(And if you’re wondering who the third coolest berg is – ask any football fan, they’ll be able to clue you in). 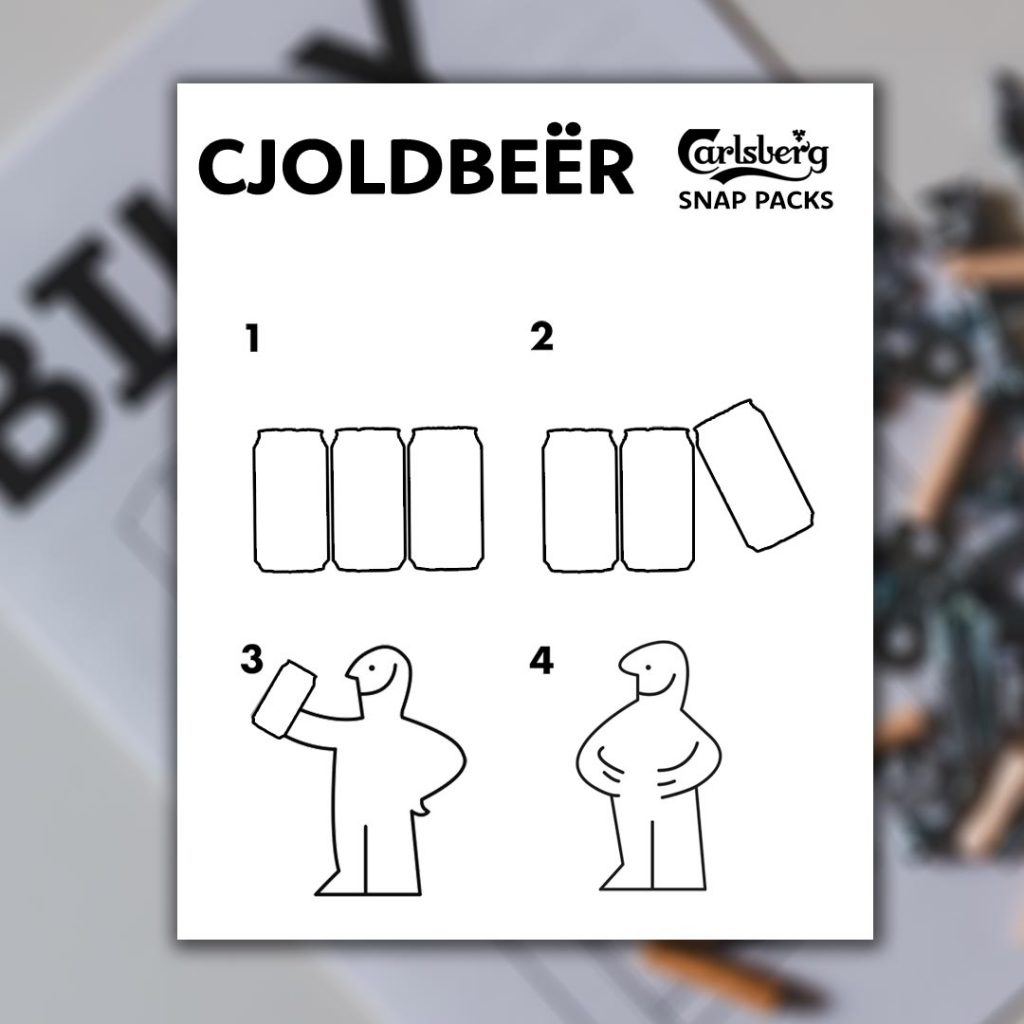 Check out our reduced-plastic snap packs.

Just because these Snap Packs are great for the environment – doesn’t mean that’s the only place you can find a funny idea that will help spread the message.

As a Danish beer, Carlsberg is one of Scandinavia’s best known exports. One of the others? Sweden’s Ikea.

The post here is doing a few different things.

Firstly – it’s making it clear that the Snap Pack’s design is innovative, by positioning it alongside some other (better known) Scandi designs.

Secondly – it’s emphasising how easy it is to snap off an ice cold beer, and crack it open.

If you’re thinking “it’s not that much easier – is that really a selling point?!” – you’re missing a trick. Because the main function here is not to emphasise the ease of opening a beer, but to position those beers against an extremely relatable annoying shared experience – putting together Ikea’s flat pack furniture.

A post like this won’t get likes, shares and comments because people are impressed with how easy it is to open a can of Carlsberg. It’ll get them because people emphatically agree that putting together flat pack furniture is a nightmare – and love that you’re using the snap pack’s simplicity to take a swipe at them.

If Carlsberg did comedy – that would be worth them keeping in mind.

Our snap pack uses 76% less plastic than other six packs. 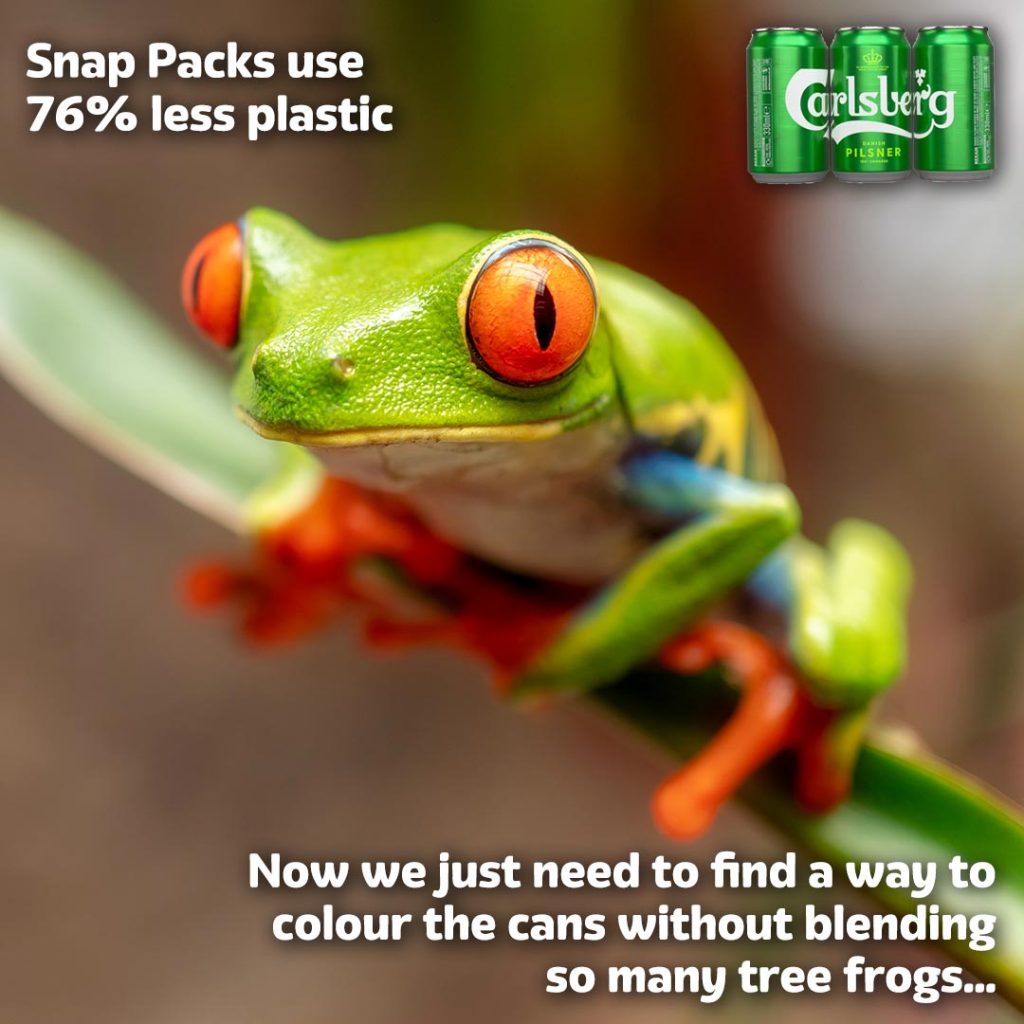 Ok – Carlsberg – if you’ve got the balls to use this one, you can use it for free.

(In fact – you can use any of them for free – because we’d LOVE the chance to use your 3.36 million Facebook Followers in an A/B Test that demonstrates just how much further content travels when you’re able to make your audience laugh.)

This is another example of false modesty – but this one’s much more outlandish.

There are people who will hear about the Snap Packs – and their gut response will be “doesn’t solve everything though”.

Technically they’ve got a point.

This tweet uses that gut response to its advantage – declaring an additional “thing that we need to stop doing, for the sake of the planet” that’s so ridiculous that it’s got to be made up.

Not only does the absolute absurdity of the idea make it funny (and in my opinion – if a brand like Carlsberg tweeted it, it would be so completely unexpected it would become the spit-your-tea-out-laughing kind of funny) – it also neatly guides our brains towards the belief that the only environmental issues Carlsberg aren’t tackling are the funny, made-up ones.

Having said that – at least 10% of the people on the internet either take everything at face value, or pretend to in order to have something to argue about – so if they did post this, you’d expect at least a little outrage. But that outrage would be followed by the other 90% of the internet piling on to correct the confused, an ongoing discussion, both Carlsberg and Tree Frogs hitting all of the trending topics lists, and massive amplification for the brand.

But like I said. They probably haven’t got the balls.